There’s a new player in the low-cost, ARM-based, mini-computer space. The BeagleBone Black is a $45 device which can run Linux or Android software and which can be used as a barebones computer or as the brains of a hardware project such as a robot, a home automation system, or more.

It’s sort of what you’d get if you crossed a Raspberry Pi with an Arduino board, although neither comparison is quite perfect. 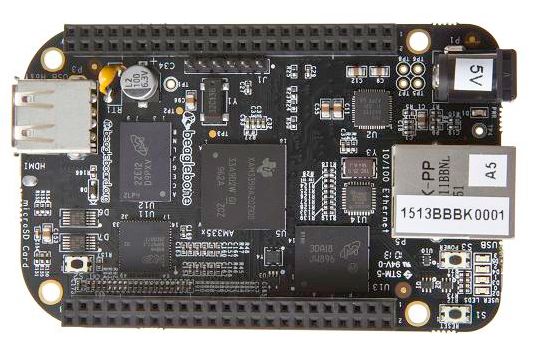 The BeagleBone Black has a more powerful processor than the Raspberry Pi, for instance, but it doesn’t have quite as much graphics performance.

And while it has microcontrollers similar to what you’d get with an Arduino board and supports “capes” that can add functionality to the basic device, the BeagleBone Black isn’t compatible with the many existing Arduino shields.

But the BeagleBone Black is still an interesting low-cost tool for DIY or educational projects.

It features a TI Sitara AM335x ARM Cortex-A8 single core processor, PowerVR SGX530 graphics, 512MB of RAM, and 2GB of built-in storage, as well as a microSD card slot for extra storage. It supports 10/100 Ethernet connections, has a USB host port and a USB client port, and a micro HDMI port (which only supports resolutions up to 1280 x 1024 pixels).

The board also features 2 PRU 32-bit microcontrollers, has 2 46 pin headers, and many more I/O options.

You can run Ubuntu Linux, Angstrom Linux, or Google Android 4.0.3 on the BeagleBone Black.

As CNX Software points out, while the Raspberry Pi mini-computer has a slower ARM11 processor, that device supports 1080p output and has a more powerful graphics core which could make it a better option if you’re planning to build a cheap home theater PC running XBMC or similar software. There’s also already a large community of developers working on projects for the Raspberry Pi.

Yet the BeagleBone Black might make a better starting point for building hardware devices ranging from simple robots to garage door openers. It also has better support for Android if you want to build your own tablet or Android-based PC.

One reply on “BeagleBone Black is a $45 Android, Linux computer and hardware prototyping board”