The Asus Taichi is a notebook with two displays — one on either side of the lid. With the lid open, the Taichi looks like a laptop with a standard LCD display. But when you close the lid you can hold the computer like a tablet and use the touchscreen display.

Asus has been showing off a model with 11.6 inch displays for a while. It’s expected to ship in December and it’s up for pre-order for $1299 and up. Asus hasn’t revealed a price or launch date for the upcoming 13.3 inch model yet… but US retailer B&H has. 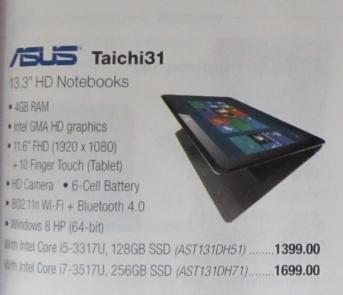 There’s still no mention of this model on the B&H website, but it seems like the retailer is expecting the computer to launch sometime this winter.

If the 13 inch model is anything like the Taichi21 I tried out recently, only the outer screen has a touch panel. The laptop screen is just a normal display. One nifty feature though, is an Asus utility that lets you choose how to use the two screens. You can shut off one while you use the other, display the same content on both, or show different items on each screen.

For instance two people can sit across a table from one another while one watches a movie and the other edits an Office document.

Interestingly the catalog describes the Taichi31 as a 13.3 inch notebook, but also says it has an 11.6 inch screen — so I suppose we should take this listing with a grain of salt.

One reply on “Asus Taichi 13 inch dual-screen notebook priced at $1399, coming this winter”