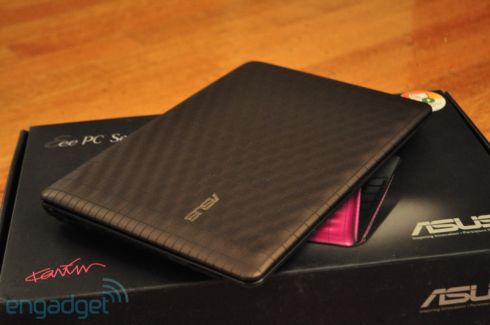 The Asus Eee PC 1008P Karim Rashid Edition is a distinctive looking nettop, thanks to its designer edition crocodile-style cover. It’s also one of the thinnest netbooks on the market, measuring just 1 inch thick. Engadget has posted a review of the laptop and the good news is that it looks as good in person as it does in the pictures. The bad news is that the battery life is pretty subpar for a netbook with an Intel Atom N450 processor.

The Eee PC 1008P comes in hot pink or chocolate brown, with the brown color looking much more subdued. Overall, the notebook looks a lot like the Eee PC 1008HA, which has been available since last summer. But the new model ships with Windows 7 Home Premium, 2GB of RAM, a 320GB hard drive, and a removable battery.

Unfortunately, Engadget’s Joanna Stern found that the notebook lasted for just 3 hours and 20 minutes in a video rundown test, which is about 5 hours less than the score notched by the Asus Eee PC 1005PE. Oh yeah, and the Eee PC 1005PE sells for well under $400, while the Eee PC 1008P has a suggested retail price of $499.

It’s nice that you do get the extra memory, storage space, Windows 7 Home Premium, and designer lid for your money. But a higher capacity battery would also have been nice.