As expected, a second-generation Archos GamePad tablet is on the way. On the outside, the Archos GamePad 2 looks a lot like the model that launched earlier this year. Both are 7 inch tablets with game controllers built into the sides of the case.

But the new Archos GamePad 2 has a faster processor, higher resolution display, and bigger battery, among other improvements. It’s expected to go on sale in Europe by the end of October, with a list price of about 180 Euros. 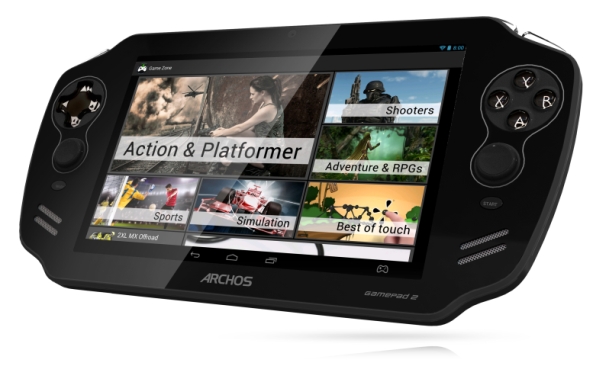 The Archos GamePad 2 features a 1.6 GHz Rockchip RK3188 quad-core processor, 2GB of RAM, and a 7 inch, 1280 x 800 pixel IPS display. There’s also a mini HDMI port in case you want to play games or videos on a big screen, stereo speakers, a mic, and G-sensor.

It will be available with 8GB or 16GB of built-in storage, and has a microSD card slot of you need more than that. There’s a front-facing camera, and the tablet runs Android 4.2.2 Jelly Bean software.

Archos will ship the tablet with a few games including Asphalt 8 and Modern Combat 4. Both games have been designed to work with the tablet’s physical controls. Most Android games have not, but Archos includes button-mapping software that lets you assign functions to each button so you can control many games that wouldn’t otherwise work with physical controls.

The tablet includes the Google Play Store, but you can also use the Archos Game Zone to find games that are already compatible with the GamePad 2.