It’s been more than a year since HP discontinued the first and only webOS tablet, and hackers have been running Google Android on the HP TouchPad for almost as long. Since then we’ve seen every major version of Android ported to run on HP’s hardware.

But there’s always been one problem: Nobody’s managed to get the front-facing camera on the HP TouchPad to work with Android… until now. 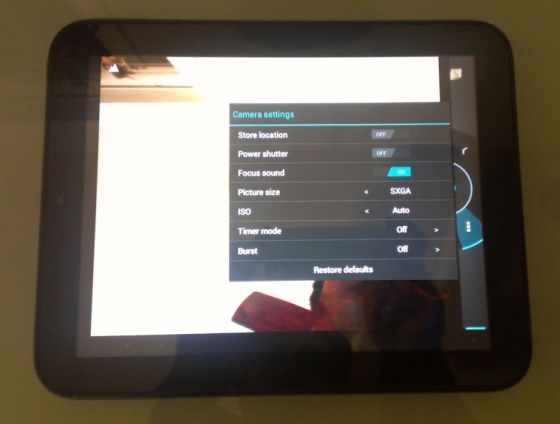 Developer Dorregaray has created a custom, unofficial version of CyanogenMod 9 for the HP TouchPad which includes a partial support for the camera.

As of 9/25/2012, the software is still pretty buggy. You can use the built-in camera app to preview pictures and take snapshots, but third party apps such as Skype aren’t working yet.

Update: As of 12/09/2012, the latest official nightly builds of CyanogenMod 9 include support for the camera — but you may also need to flash Dorregray’s camera patches in order to get it to work properly without crashing or causing glitches.

The previews also look funny. When you first launch the app, they’ll be rotated in the wrong direction, and after you snap the first picture the preview will be properly oriented… but distorted.

Also, once you exit the camera app you won’t be able to launch it again unless you reboot the tablet.

In other words… the camera isn’t exactly ready for prime time yet. But for the first time, you can actually use the camera on the HP TouchPad to do something while running Google Android.

You can download Dorregaray’s preview build of CM9 with camera support at the RootzWiki forum. If you’re already running Android on your tablet, all you need to do is reboot into ClockworkMod or TWRP recovery, factory wipe your tablet, and install Dorregaray’s latest build.

If you’re HP TouchPad is only running webOS and you’ve never installed Android, you can follow our step-by-step guide. Just use the latest Dorregaray build instead of update-cm-9.0.0-RC0-Touchpad-alpha2-fullofbugs.zip.