Google may be done selling Nexus smartphones, but that doesn’t mean the company’s new Pixel phones don’t have some of the same developer-friendly features.

Wondering whether the Google Pixel and Pixel XL would have unlockable bootloaders, Dallas Thomas from Android Wonder HowTo reached out to Google for comment.

The short answer? Yep. The longer answer: maybe not every Pixel phone will have an unlockable bootloader. 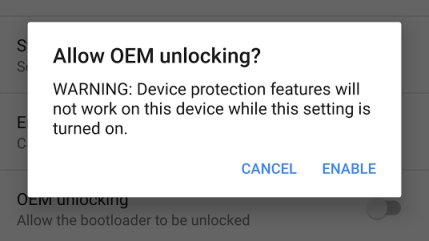 Basically, a Google spokesperson confirmed that anyone who purchases a Pixel phone from the Google Store will be able to unlock the phone’s bootloader and potentially root the device (or install a custom recovery or custom ROM).

But the Google Store isn’t the only place to buy a Pixel phone. While the Pixel phones support all major US wireless networks, Verizon is Google’s exclusive carrier partner in the United States, which means it’s the only wireless carrier that will sell you the phone directly if you’d prefer not to buy it from Google for some reason.

There had previously been reports that Pixel phone sold by Verizon would not have unlockable bootloaders, and Google’s very specific language suggests that those reports were accurate.

The thing is, there’s really not much reason to buy a Pixel from Verizon. Don’t have $649 or more to spend on a phone, and want to finance it? No problem. Google will let you pay for the phone in 24 monthly installments of $27.04 (or more, for higher-priced models).

So you can just buy the phone separately and buy a Verizon SIM card.

Of course, this probably isn’t an issue if you never plan to unlock your bootloader, root your device, or install a custom ROM. But given that Google has a habit of dropping support for its phones after a few years, an unlockable bootloader is a sort of insurance policy that may allow you to keep your phone up to date through unofficial firmware even after Google stops delivering official updates.