Google is courting app developers to create new apps that can run on Chromecast and other devices that support the Google Cast protocol… including new Android TV devices set to launch later this year.

The company wants to make it easier for users to find apps that work with Chromecast through chromecast.com/apps. Google is also making it easier to share content to a Chromecast — even if your phone isn’t connected to the same WiFi network as the Chromecast.

Google is using a neat trick to do this: when you want to pair the Chromecast with your device, it’ll emit an ultrasonic sound through your TV speakers. You won’t hear anything, but your phone should pick up the phone and establish a connection.

Then you can find media you want to play while your phone is connected to your cellular network, tap the Cast button, and the Chromecast will start streaming the audio or video over WiFi.

If that doesn’t work, you can use a pin number to pair your mobile device with a Chromecast.

Since Chromecast downloads content straight from the internet, not from your phone, you won’t burn through your mobile data… just select a video

The feature is optional, so if you don’t want other people sending content to your Chromecast, you don’t have to let them.

Google is also updating Chromecast with a feature that lets you display news, photos, artwork, weather, or other information on your Chromecast when you’re not using it to watch videos. 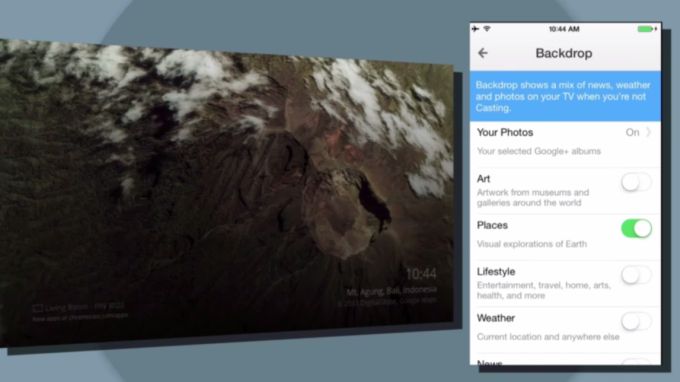 You can setup Backdrop using an iOS or Android device… and the feature will work with Google Now so you can just ask your phone “what’s on my Chromecast” to receive more information about the pictures displaying on your TV.

Google is also bringing support for screen mirroring, letting you stream anything on your Android phone or tablet to your TV.

That includes photos, videos, or even live views from your camera.

Support for screen mirroring will roll out initially to a handful of devices including the Google Nexus 4 and later, LG G2, HTC One M7, Samsung Galaxy S4, S5, and Note 3, and more.