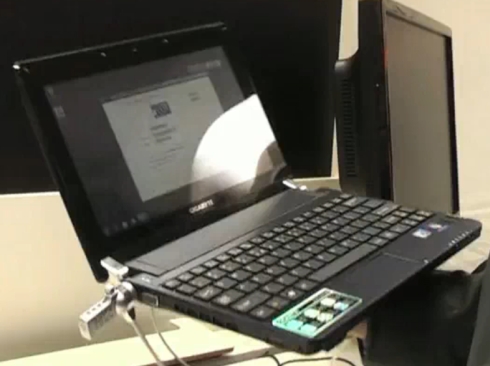 It looks like Gigabyte is going to be one of the first PC makers to jump on the 10-inch netbook with NVIDIA ION bandwagon. The company is making an ION version of the M1000 netbook we told you about the other day.

Netbook News.de reports that the ION version will be called the Gigabyte M1000N and it will feature a version of NVIDIA’s next-generation ION platform as well as a 1.83GHz Intel Atom N470 CPU and a 1366 x 768 pixel HD display.

While NVIDIA offers ION graphics for 10 inch netbooks as well as larger notebooks, the 10 inch version is a little less powerful. It has half the CUDA cores of the ION chip found in nettops and notebooks with 11.6 inch or larger displays. That means netbooks like the Gigabyte M1000N and Acer Aspire One 532G won’t offer the same level of graphics performance as machines like the Asus Eee PC 1201PN. But the ION chip should be more than powerful enough to handle 1080p HD video playback, Flash video acceleration, and some 3D graphics.