A team of independent developers have ported a beta version of CyanogenMod 7 to run on the NOOK Tablet. CM7 is a custom version of Google Android based on the open source version of Android 2.3 Gingerbread.

Update: We’ve put together a step-by-step guide for installing CyanogenMod 7 on the NOOK Tablet. 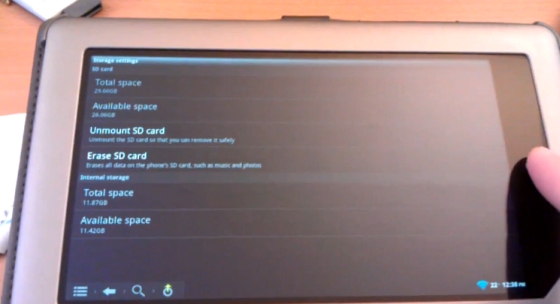 At the moment there are some serious bugs with CyanogenMod 7 for the NOOK Tablet, so the developers have removed the download links to work out the kinks and minimize the risk of users breaking their tablets. But when everything’s fixed there will be two methods for installing CM7:

If you choose to use the tablet’s internal storage, you’ll erase the software that comes with the tablet. Barnes & Noble’s NOOK Tablet operating system is based on a highly modified version of Android with an emphasis on reading eBooks and running apps downloaded from the B&N Shop. Fortunately, you can backup your device before installing CyanogenMod 7 so that you can restore the default software at any time.

On the other hand, if you install CM7 to a microSD card, you can boot directly from the removable storage card without making any changes to the default software at all. This will effectively give you a dual-boot device. Hackers have been doing something similar with the Barnes & Noble NOOK Color since shortly after the color eReader was released.

Unfortunately, setting up a bootable SD card is a lot more work than simply using the internal storage. But you can find instructions for doing it in the xda-developers forum thread for rooting a NOOK Tablet with an SD card or the thread for installing CyanogenMod 7.

If you already installed CM7 to your NOOK Tablet, make sure not to format an SD card while using the tablet, since it will temporarily brick your device. But if you do, you may be able to repair your tablet using a fix posted by Indirect.

Developers are also working to port CyanogenMod 9, which is based on Google Android 4.0. But the CM7 team managed to get a (mostly) working ROM out the door first.

Some of the advantages CM7 has over the default Barnes & Noble software include:

Early testers are reporting that some third party apps don’t work and that there are some graphics problems — but this is still a beta version of CyanogenMod 7 and it’s still under active development.

And CelticWebSolutions, one of the lead developers of the project posted a video of an Alpha version of CM7 a few days ago.

The NOOK Tablet features a 7 inch, 1024 x 600 pixel IPS display, a 1 GHz TI OMAP 4 dual core processor, and 16GB of storage. It sells for $249, or about $50 more than an Amazon Kindle Fire — but the NOOK Tablet has a microSD card slot, a microphone and volume buttons — all features that Amazon’s tablet lacks.