The ZX Spectrum personal computer was released in the UK in 1982, at a time when the Commodore 64 was taking off in the US, and the Apple II was starting to show its age.

Decades later, hardware and software hackers have kept the ZX Spectrum platform alive with new features… and now a team is running a crowdfunding campaign for a modern version of the classic PC for folks who want to play old-school games or newer software.

Thew new project is called the ZX Spectrum Next, and it’s a computer-in-a-keyboard featuring design work from Rick Dickinson, the original designer of the ZX Spectrum.

The only catch? You can’t actually walk into a store and buy a ZX Spectrum Next yet. It’s only available to backers of a crowdfunding campaign and the finished units aren’t expected to ship until January 2018. 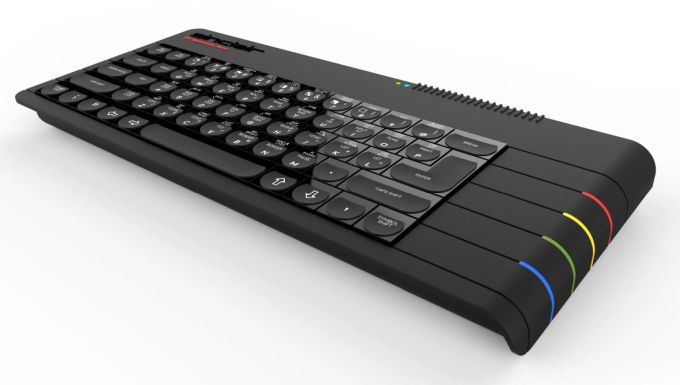 A pledge of £175 or more reserves a ZX Spectrum Next (although you’ll also have to pay an extra £25 for international shipping unless you’re in the UK, where the shipping fee is £10).

Don’t want the new keyboard/case? You can request just the computer board for a pledge of £99, with an estimated ship date of August, 2017.

The new system is completely compatible with hardware and software developed for the original ZX Spectrum, and even has the same Z80 processor with 3.5 MHz and 7 MHz modes and 512Kb of RAM (which can be expanded to 1.5MB using internal memory or 2.5MB of external memory). But it also has new features including HDMI output, and an SD card.

There’s also an optional Raspberry Pi co-accelerator board that gives you the ability to add Raspberry Pi’s tiny, cheap computer with a 1 GHz processor, 512MB of RAM, and a graphics processor with support for OpenGL graphics, among other things.

But this new campaign comes from a completely different team, includes some real-world videos showing the hardware in action, and includes a promise that the firmware and schematics “will be fully open source,” allowing anyone to not only inspect, but also modify the hardware and software.

With three weeks left to go in the campaign, the ZX Spectrum Next has already more than met its £250,000 pledge goal.

via Boing Boing and The Register