Transparent display technology has been around for a few years, but there aren’t many devices you can actually buy with see-through displays. That’s because the technology probably makes more sense for large, commercial applications like retail displays than for mobile devices like laptops, tablets and smartphones.

After all, even if you make the screen transparent, you’ll probably have to put an opaque battery, motherboard, processor, and other hardware around it.

But that hasn’t stopped a handful of companies from showing off transparent smartphone prototypes from time to time. The latest concept design comes from Chinese phone maker ZUK. 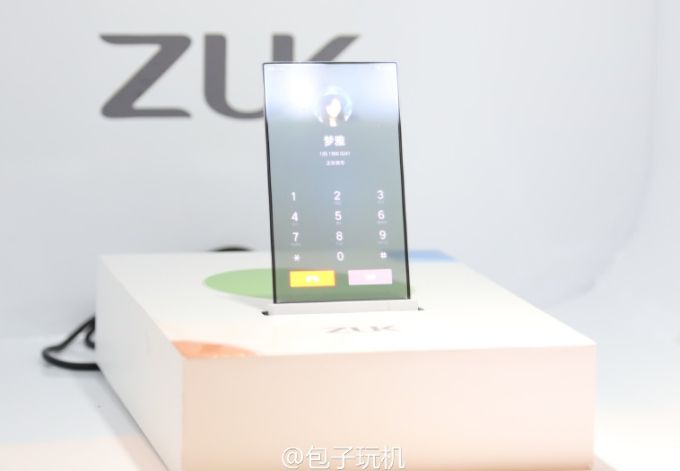 ZUK is the Lenovo-backed company that recently launched the ZUK Z1 smartphone with a $284 price tag, a big battery, 3GB of RAM, 64GB of storage, USB-C connector, and 5.5 inch, full HD display.

At the launch event, the company also showed off a transparent smartphone concept that’s basically all-screen (with nearly no bezels)… and transparent screen at that. When the display is off, you can see right through it. When it’s on, images, videos, and other graphics are visible, but you can still see through the phone to the other side.

So where’s the processor and battery? Most likely in that big box underneath the phone… this is just a concept, after all. In order to actually turn the concept into a real device, you’d probably need to build the electronics into big bezels above, below, or to the sides of the screen. That’s a lot easier to do with a TV-sized screen (or even a laptop or tablet) than a smartphone that need to be small enough to slide into a pocket.

I’d be surprised if ZUK actually brought a transparent-screened phone to market anytime soon. But it’s still kind of pretty to look at. And maybe one day in the distant future when we’re powering our phones through WiFi or something instead of using big batteries, maybe it’ll actually be possible to build phones that don’t have big batteries that would block the view of a transparent display