ZTE’s Axon line of smartphones tend to feature high-end specs at upper mid-range prices, and it looks like the company may be planning to updates the Axon family with a new model that keeps up that trend… at least on the spec side.

An unannounced device that seems to be a next-gen Axon showed up recently at the GFXBench website, and the specs include a Qualcomm Snapdragon 820 processor, 4GB of RAM, and a 21MP camera (probably). 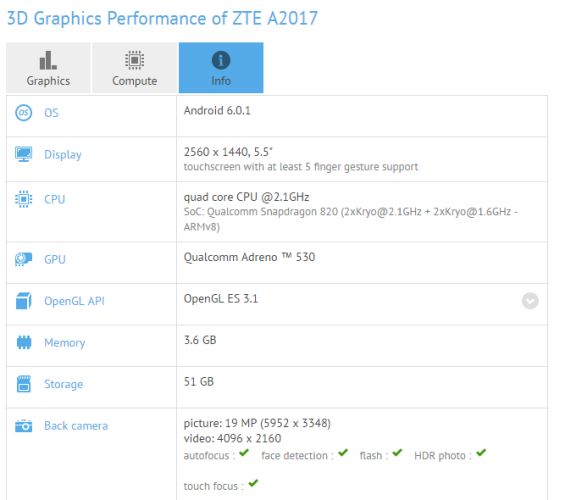 Specs like these are usually uploaded when someone runs the GFXBench test on a smartphone, and while they’re not always entirely reliable, an awful lot of phones and tablets have shown up at the GFXBench website days, weeks, or months before they were officially launched.

The new model is called the ZTE A2017, which suggests it’s in the same family as ZTE’s other Axon phones (some of which have model numbers including A2015 and A2016).

Some of the numbers look a bit funny, like 3.6 GB of RAM, 51 GB of storage, a 19 MP rear camera and a 7 MP front camera. It’s likely that the real numbers are 4GB for RAM, 64GB for storage, and 21MP and 8MP for the cameras, unless ZTE is using some very unusual components.