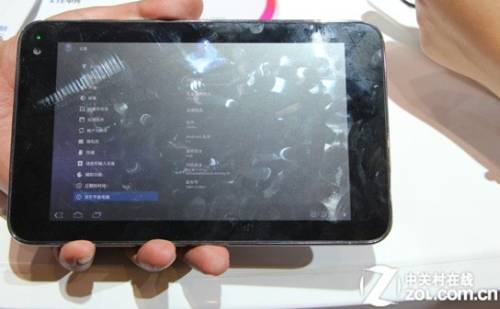 NVIDIA is expected to launch a new low power, high performance processor for smartphones and tablets later this year. The Kal-El chip is the sequel to the popular NVIDIA Tegra 2 processor, but while the Tegra 2 is a dual-core chip, Kal-El CPU will feature 4 powerful processor cores along with a fifth, lower power core that kicks in when the device is in standby to help provide longer battery life and lower power consumption.

While NVIDIA has been showing off prototypes for a few months, the company hasn’t yet officially launched the Kal-El chip. In fact, Kal-El is just a code name. The processor will probably be called something else (like Tegra 3) when it’s released.

But that hasn’t stopped Chinese device maker ZTE from showing of a 7 inch tablet featuring the new processor. On the surface, the new ZTE T98 looks like any other 7 inch Android tablet. It has a 1280 x 800 pixel display, a black border around the screen, and front and rear cameras. The tablet runs Google Android 3.2 Honeycomb and I wouldn’t be shocked if it never shows its face in America… although we have seen signs recently suggesting that ZTE will soon start selling tablets in the States.

Under the hood, the T98 has the new Kal-El processor. While the chip normally runs at 1.5 GHz, the version in the ZTE tablet appears to have been underclocked to run at 1.3 GHz.

Asus is also expected to launch a Tegra 3/Kal-El tablet soon. Recently we spotted a leaked series of benchmark results showing a next-generation Asus Eee Pad Transformer tablet. According to the test scores, the Transformer 2 will likely be one of the fastest Android tablets around, thanks to the new chipset — at least until NVIDIA’s competitors release their new quad-core chips.