The ZTE Axon is a smartphone with flagship-level specs, but a price that’s a bit below what you’d expect to pay for the latest flagship phone from Samsung, HTC, LG, or Motorola.

You can pre-order an unlocked ZTE Axon for $450 and it should ship by the end of the month. For that price you get a phone with a high-res display, an awful lot of RAM, a big battery, and Android 5.1 Lollipop software. 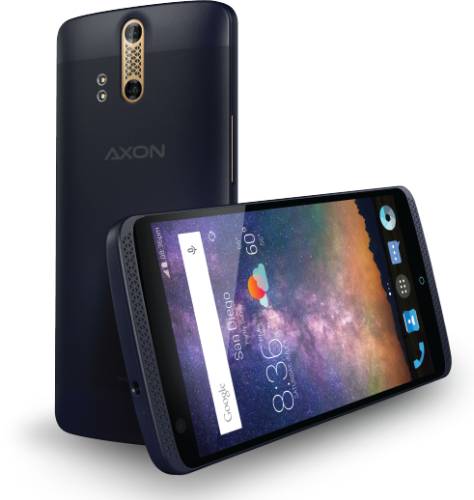 The Axon has a 5.5 inch, 2560 x 1440 pixel display, 4GB of RAM, 32GB of storage (and no microSD card slot), and a 3,000 mAh battery. It features an 8MP front-facing camera, and sports a dual-lens rear camera with 13MP and 2MP sensors for capturing images with adjustable depth of field.

The ZTE Axon is a GSM phone that supports AT&T and T-Mobile’s 4G LTE networks.

ZTE says the rear camera also has a super-fast shutter speed speed, quick auto-focus capabilities, and a f/1.8 aperture, while the front camera has an 88 degree wide angle lens.

Other premium features include support for Qualcomm Quick Charge technology, support for capturing 4K video at 30 frames per second, and an aluminum case.

So what’s the catch? There really isn’t much of one… ZTE is trying to break into the US market by offering a high-end phone at a competitive price. But there’s one feature which I suspect will turn off some potential customers: it’s powered by a Qualcomm Snapdragon 810 processor.

While that’s theoretically the most powerful Qualcomm chip on the market right now, users of other phones with the octa-core, ARM Cortex-A53 chip have complained that it overheats easily… and when it does that, the phones can take a performance hit as the CPU slows down in order to cool off.

ZTE does say this is the newer version of the Snapdragon 810 chip, which should do a better job of staying cool.