Chinese device maker ZTE has announced that it will launch two new tablets for the European Market. One will have a 7 inch display while the other will have a 10.1 inch screen, but both will feature NVIDIA Tegra 3 quad-core processors. 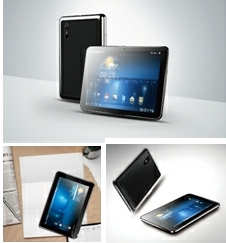 There aren’t many details about the new tablets in the official press release, but the folks at The Verge snagged some information at the ZTE press conference and Mobile World Congress.

The 10 inch model is called the ZTE PF 100. It has a 1.5 GHz Tegra 3 processor, 1GB of RAM, 16GB of storage, and a 5MP camera. It runs Android 4.0 Ice Cream Sandwich and supports HSPA mobilebroadband.

On paper the ZTE T98 looks nearly identical. It has the same processor and even the same screen resolution. But this model will have a 7 inch screen and TD-SCDMA wireless.

The Verge reports there will also be two lower-end 10 inch tablets with Qualcomm dual-core processors called the ZTE V96 and ZTE V9S.