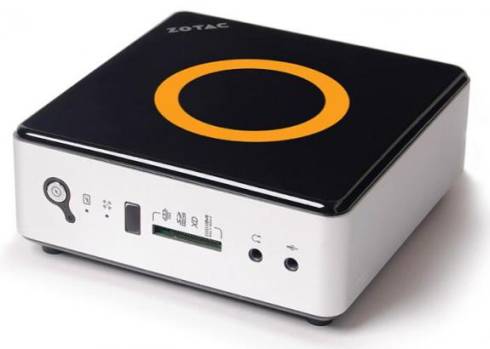 A few months ago Zotac unveiled a tiny desktop computer powered by a VIA Nano X2 dual core processor. Now it’s on track to go on sale this month in Japan.

The Zotac ZBOX Nano-VD01 features a 1.2 GHz VIA Nano X2 U4025 dual core processor with a VIA VX900H chipset and Chrome9 HD graphics with support for DirectX 9.

Like most nettops from Zottac, the computer will be available as a barebones kit, which means you can pick one up without any RAM, hard drive, or operating system. A second model will come with a hard drive and memory, but no OS. THe system can support up to 4GB of DDR3 1066MHz RAM and it features a 2.5 inch SATA 6Gb/s drive bay.

The computer has a 6-in-1 card reader, DisplayPort, and HDMI output, USB 3.0, 802.11n WiFi, Bluetooth 3.0, and Gigabit Ethernet. It’s expected to sell for $260 or less. There’s no word on whether we’ll see this model in the States, but VIA processors tend to have more traction overseas.

Earlier this month Zotac introduced a similar model called the ZBOX Nano AD-10, but that model is powered by a 1.6 GHz AMD E-350 chip and Radeon HD 6310 graphics.

via VR-Zone and PC Watch