Zotac plans to launch a whole bunch of new mini PCs in the second quarter of 2016. That includes the company’s first PC-on-a-stick, updated smartphone-sized computers with support for dual displays, a small desktop computer with support for up to 6 displays, and a new fanless PC with a Core i5 Skylake processor. 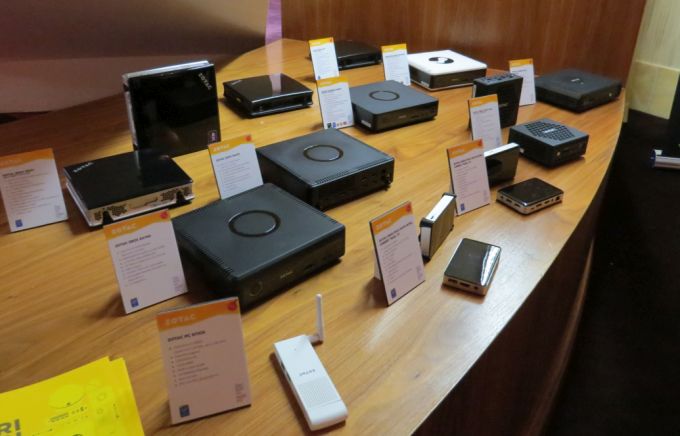 I got a chance to check out the new computers at CES this week, and although I couldn’t turn any of them on, I did get a sense of just how small some of these little computers are… and how not-that-small some others are.

Unfortunately since all of these new computers are a few months away from launch, Zotac isn’t ready to talk pricing yet.

One of the first things I noticed was that the Zotac PC Stick is probably the largest PC Stick I’ve seen to date. Don’t get me wrong. It’s still small enough to hold in one hand or slide into a pocket when it’s not in use. But it’ll stick out from the HDMI port of your computer much more than a smaller model like the Intel Compute Stick.

But this little PC has plenty of room for a full-sized USB port, Ethernet jack, micro USB port, and microSD card slot. There’s a dedicated power button and an adjustable antenna that attaches to one end.

There’s plenty of ventilation in the case, and Zotac tells me that under the hood there’s a mini fan that helps keep the Atom x5-Z8300 processor from overheating.

At first glance the new ZBOX Pico models look a lot like older versions. But the new models have new processors with more powerful graphics and dual display ports that allow you to connect up to two displays at a time.

Both models have 2GB of RAM, 802.11ac WiFi, and Bluetooth 4.0. And both are fanless systems with passive cooling. The T4 has a slightly larger case to help dissipate heat generated by its more powerful processor.

Interestingly, these models aren’t really that much bigger than the PC Stick… but they have more surface area (which helps with passive cooling), more ports, and a design that means you can’t just plug the computer directly into your HDMI port without a cable.

The ZBOX C line of computers are small, fanless desktops with passive cooling systems and plenty of ventilation to help hot air escape.

Zotac is introducing a few new models this year, including the ZBOC CI323 nano with an Intel Celeron N3150 Braswell processor and a compact design that makes the computer small enough to hold in one hand. It’s basically the evolution of the Zotac ZBOX CI321 nano I reviewed last summer.

It also has DisplayPort, HDMI, 802.11ac WiFi, and Bluetooth 4.0. The computer features dual Gigabit Ethernet ports and supports up to 16GB of RAM and features a 2.5 inch drive bay.

While the Zotac C Series is relatively small for a desktop computers, it’s about twice the size of the CI323 nano and it’s at least twice as heavy. Zotac says that’s because it has a large heat sink under the hood to keep things cool without using any noisy fans.

Like the CI323 nano, you could plug the new C Series into a TV and use it as a media center. But thanks to the more powerful laptop-class processor, you could also probably use this model as a relatively compact, silent desktop computer that can handle just about any computing task.