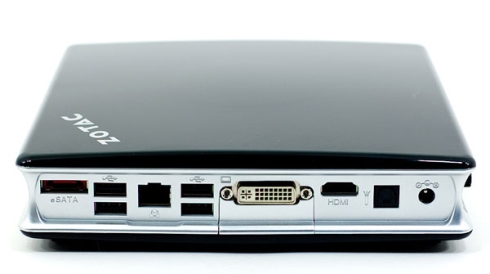 The Zotac ZBOX HD-ID11 nettop is one of the first computers to include NVIDIA’s next-generation ION graphics. The small form factor desktop isn’t available for sale yet, but it’s due out soon and the folks at AnandTech got their hands on one and have posted an early review.

The nettop is a DIY unit, which means you need to install your own hard drive, RAM, and operating system. So clearly your results may vary. But some things should hold true for most users. For instance, the nettop can handle 1080p HD video including Blu-Ray discs. High definition Adobe Flash video, on the other hand, doesn’t appear to work all that well — even with Adobe Flash Player 10.1, which should support hardware acceleration. It looks like we’re still waiting for an updated driver from NVIDIA.

Overall, AnandTech reports that the new ION chip is a bit faster than the first generation, with the new system scoring higher than a similar nettop from Zotac with first generation graphics in every benchmark.

That’s the stuff you really need to know if you want to use a netbook or nettop with the latest NVIDIA ION graphics. Anandtech’s review also features a breakdown of exactly how the ION chipset works for those who want to truly understand what’s going on under the hood.

AnandTech also liked the build quality of the $260 ZBox HD-ID11. While it’s made of plastic, it doesn’t feel like cheap plastic. And it has a nice array of ports including 6 USB ports, an eSATA port, DVI and HDMI output, and Ethernet. While you can hear the fan running when the CPU is working hard, the nettop is reportedly pretty quiet overall.