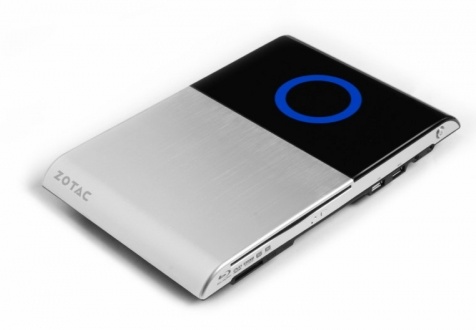 Zotac’s latest mini-desktop computer may be a low power machine compared with most full-sized desktops, but it’s got the kind of hardware that will put most nettops to shame. The Zotac ZBOX AD03BR-PLUS is a slim desktop system with a 1.6 GHz AMD E-350 dual core processor and AMD Radeon HD 6310 graphics.

While that chip has shown up in a number of laptop computers recently, the Zotac nettop is one of the first desktops I’ve seen to use an AMD Fusion chip. And since space and power consumption aren’t at a premium in a desktop computer the way they are in a laptop, Zotac found room for a Blu-ray optical disc drive.

The ZBOX AD03BR comes with an integrated 4X Blu-ray reader which also functions as an 8X DVD writer. The nettop also has USB 2.0 and USB 3.0 ports, an eSATA/USB combo port, mic and headphone jacks, a flash card reader, HDMI and DVI output, and an SPDIF audio output. It has Gigabit Ethernet and 802.11n WiFi.

Like most Zotac nettops, the ZBOX AD03BR ships without an operating system, but the AD03BR-PLUS model that’s on sale now does come with 2GB of RAM and a 250GB hard drive. It’s the Blu-ray drive and dual core chip though, that make it more expensive than its peers anyway. Buy.com has one of the lowest prices around, and the retailer is still charging $530 for the computer.