Zotac is updating most of its small form-factor desktop computers this year with new models sporting Intel Kaby Lake processors,

That includes the company’s MI line of mini PCs, the CI line of slightly larger, but quieter models with fanless designs, and the more powerful Magnus models with NVIDIA graphics.

Some models also include Thunderbolt 3 ports… which is handy, because Zotac is also showing off a prototype of its new Thunderbolt 3 graphics dock, which lets you add desktop-class graphics to laptops, mini PCs, or other computers with Thunderbolt 3/USB Type-C ports. 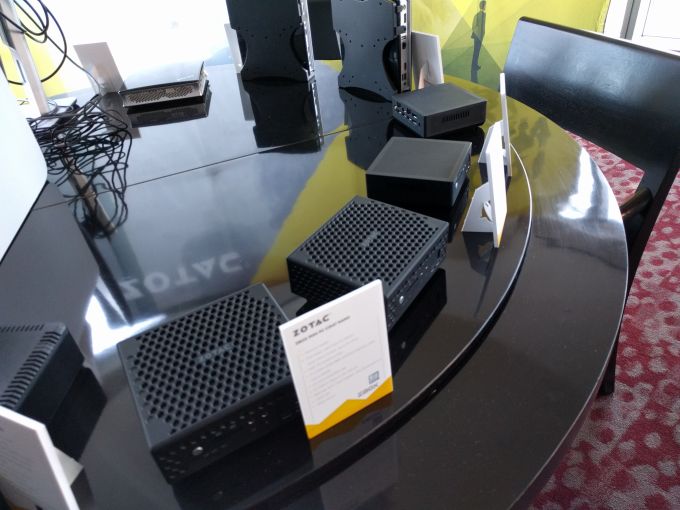 The computer features four USB 3.0 ports, two USB 3.1 Type-C ports, and a single Thunderbolt 3 port, which is all it takes to connect the graphics dock.

There are also DisplayPort and HDMI ports and 802.11ac WiFi and Bluetooth 4.2.

Hook up the graphics dock, and you can add any full-size 13 inch or smaller graphics card from NVIDIA or AMD, turning this compact machine into a gaming computer. The dock hsa a 400 watt power supply and built-in cooling fans.

But the graphics dock is a lot bigger than the PC itself, so you may be better off just buying one of the ZBOX systems that comes with NVIDIA graphics built in.

And if you don’t need anything more powerful than Intel HD graphics, the fanless systems like the CI547 Nano and CI527 Nano with Core i5 and Core i3 Kaby Lake chips aren’t much bigger than their MI series counterparts and offer nearly identical specs.

Zotac hasn’t announced pricing for any of the new models yet, but says they should all be available in the first quarter of 2017, with some models coming within the next few weeks.

The graphics dock on display at CES is an early prototype (you can see where the paint dried funny), but it’s also set to launch by the end of March.

I asked Zotac if there would be any updates to its even smaller Pico line of mini PCs or the PC sticks that the company launched last year. The answer is that while Zotac will continue to sell existing models, and even has an Intel x5 Cherry Trail-powered PI330 on display at its hotel suite this week, the company has no current plans to introduce new models. That makes sense, since Intel has pretty much phased out the Atom processors used for consumer devices.