Zotac plans to show off a number of small form-factor computers at Computex, including a bunch of models we first saw at CES in January and some brand new devices… like the ZBOX edge mini PC.

Details are pretty light, so far, but the company says the small desktop computer measures less than 1.3 inches thick, support up to an Intel Core i7-8565U Whiskey Lake processor, and that it can be used for “edge computing and more.”

Zotac has also released some pictures ahead of Computex which give us an idea of what to expect. 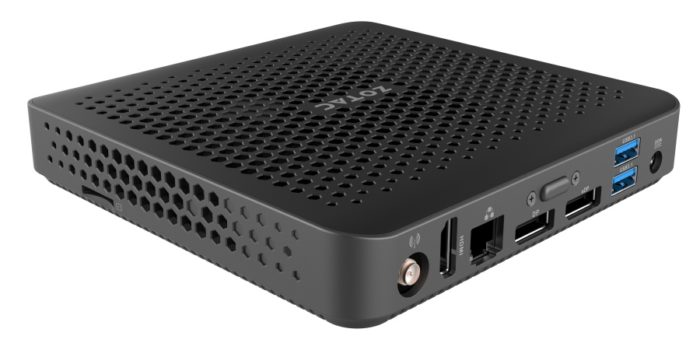 The system features two DisplayPort jacks, an HDMI port on the back, suggesting that it should be able to handle up to three displays. There’s also an Ethernet jack, two USB 3.1 ports, an antenna adapter, and a power jack on the back.

On the front there’s a power button, a headset jack, another USB 3.1 Type-A port, and a USB-C port… which means that maybe you can connect up to four displays… if you don’t mind running cables out of the front and back of the system.

There’s an SD card reader on the side, and a whole bunch of holes in the top and sides of the case for ventilation. I wouldn’t expect a device this size to be fanless, but the holes in the case should allow for improved airflow.

Update: Zotac tells me that the Edge series features dual M.2 slots for solid state storage, but there’s no 2.5 inch drive bay. So if you want to add a hard drive, it’ll have to be an external one.

The new Edge mini PCs should be available in the fourth quarter of 2019.