Zotac’s latest pocket-sized computer is the company’s most powerful to date. The Zotac ZBOX Pico PI470 is a tiny, fanless computer that’s smaller than a modern smartphone, but it’s not a phone… it’s a full-fledged PC which will be available with up to an Intel Core i7-8500Y processor when Zotac releases the PI470 later this year. 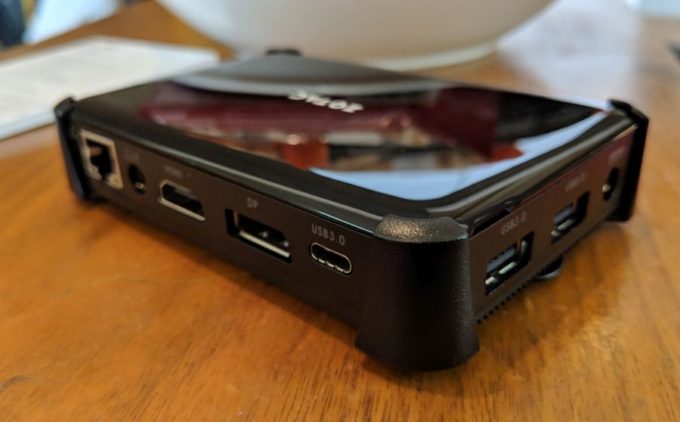 The company has been selling computers with similar designs for a few years. But up until now most have been powered by Intel Atom or Celeron processors. I reviewed one of the first in 2014, and it was powered by an Intel Atom Z3735F chip, and a few months ago Zotac announced the most recent model, which sports an Intel Celeron N4100 Gemini Lake quad-core processor.

That means that despite having fewer CPU cores, you should expect much better all-around performance from the new model… although it remains to be seen how well the PI470 will dissipate heat. If the system gets too hot during performance, it could cause the operating system to throttle the CPU so that it runs at lower speeds.

The Pico PI470 also features Intel UHD Graphics 615 and the system should be able to drive multiple displays. It has DisplayPort 2.0 and HDMI 2.0 ports, a USB type-C port, two USB Type-A ports, a Gigabit Ethernet port, and a microSD card slot.

The little computer comes with 4GB of RAM, 32GB of eMMC storage, and Windows 10 Home pre-installed. It supports 802.11ac WiFi and Bluetooth 5.0. And Zotac ships the system with a mount that you can use to connect the computer to the back of a display.

Zotac is also showing off a bunch of other small form-factor desktop computers at CES this week, including an updated version of its C600 fanless series that packs an Intel Whiskey Lake processor, and a compact gaming desktop called the MEK Mini.