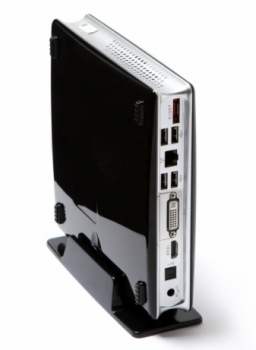 Hot on the heels of the recently announced Zotac ZBOX HD-ID11 nettop with an Intel Atom Pine trail chip and next-generation ION graphics, Zotac is introducing two new models. Blogeee has the details on a new model with an Intel CULV processor and ION graphics and another with an AMD/ATI chipset.

Meanwhile, the Zotac ZBOX HD-AD01 will have a 1.6GHz AMD Athlon X2 Neo L325 dual core processor and ATI Radeon HD3200 graphics. It will have the same connectivity options as the CULV version — and the Intel Atom models, for that matter. But it will sell for closer to $240.

If those prices sound almost too reasonable, that’s because Zotac tends to sell barebones units that come without operating system, RAM, or hard drives — although from Blogee’s description, it sounds like these machines might ship with 2GB of RAM and 160GB hard drives.