The first computer/game consoles running Valve’s SteamOS should begin shipping in November. Valve calls the systems Steam machines, and says about a dozen partners will be launching models.

One of those partners is Zotac, which just unveiled the Zotac Steam Machine SN970, a small form-factor gaming PC that will ship with SteamOS. 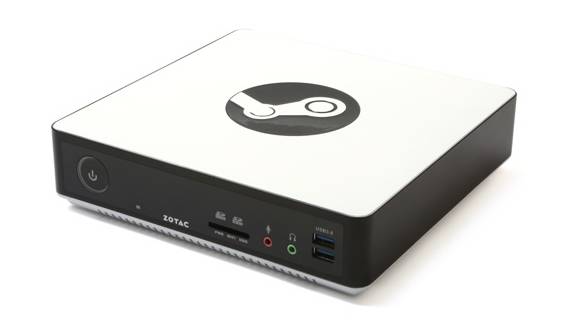 It supports 4K output and up to four displays thanks to four HDMI ports and also features four USB 3.0 ports, and two USB 2.0 ports as well as an SD card slot and mic and headphone jacks.

Zotac used to be best known for making graphics cards and motherboards, but the company has also been producing tiny desktop computers for the past few years. Up until recently most of those were barebones mdoels that shipped without an operating system, but in 2014 Zotac started pre-loading Windows 8.1 with Bing software on some models.

The upcoming Steam Machine SN970 though, will be the first gaming computer from the company that comes as full system, complete with memory, storage, and an operating system designed for managing and playing games.

Update: According to the Steam website, the Zotac Steam Machins SN970 will ship with an Intel Skylake 6th-gen Core processor and sell for $999.