Zotac has been selling small form-factor desktop computers under its ZBOX line for the past few years. While early models featured low-power Intel Atom processors, the company has gradually added faster and faster chips. Earlier this year Zotac introduced the first model with an Intel Core i3 chip. 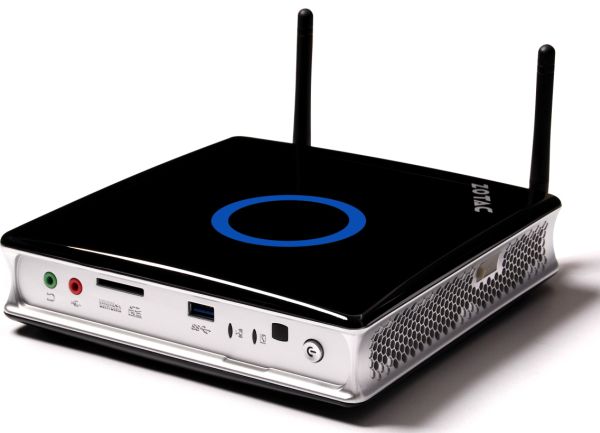 Like the company’s earlier models, these new ZBOX computers will be available as barebones systems without RAM or hard drives, or as PLUS models featuring 4GB of RAM and 500GB hard drives. Either way, you’ll have to supply an operating system yourself.

The computer also comes with a media center remote control and a USB infrared receiver.

Bit-Tech reviewed this model recently, and found that the computer does a pretty good job with media playback and general computing tasks, but that the graphics capabilities aren’t really good enough to handle recent video games.

If you’re looking for a gaming system, you should probably keep looking. But the ZBOX ID89 seems like a pretty good option for building a home theater PC or for use as an all-purpose computer if you don’t have a lot of room for a tower case.

Ths ZBOX ID89 Plus is expected to sell for around $519. The model without the memory and hard drive should be somewhat cheaper.

The rest of the specs are the same, including Intel HD 2500 graphics and DirectX 11 support.

There’s no optical disc drive on either model, so you’ll need a USB drive if you want to watch DVDs or Blu-ray discs while using the computer a media center.

Both boxes measure 7.4″ x 7.4″ x 2″ and come with VESA monitor mounts which you can use to attach the PC to the back of a display.

9 replies on “Zotac beefs up ZBOX mini-desktops with Core i3, Core i5 options”