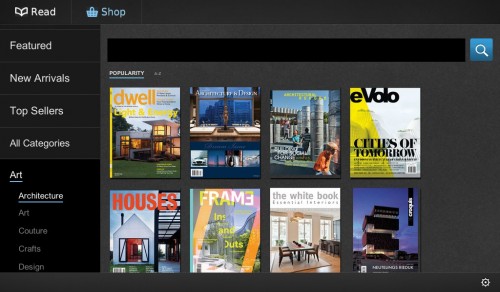 Zinio is one of the top apps in the digital periodical game. It offers popular apps for iPad and Android that let users subscribe to hundreds of magazines or buy individual issues.

If you bought a tablet and wanted  the eco-friendly route and ditch your dead-tree subscriptions, it’s well worth checking out.

And now, those of you you who own a BlackBerry PlayBook can get in on the action as well. Zinio has landed in App World, and it’s even a native app — not simply a port of the company’s Android app.

I did notice the odd responsiveness problem — such as taps on UI elements not registering — but overall it functioned quite well. It’s every bit as attractive as the Zinio apps on other platforms, and it’s easy to search for titles, add and manage your subscriptions, and reading is quite enjoyable on the PlayBook’s crisp, bright 7-inch display. 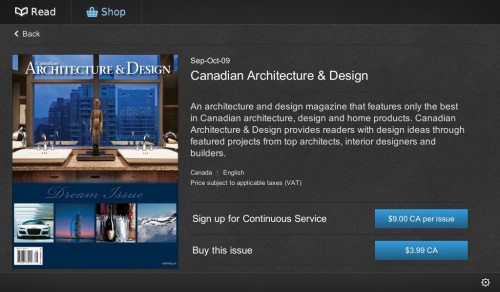 When you’re reading magazines in Zinio, they look like the print editions — complete with full-page ads.

Available titles include National Geographic, The Economist, Popular Science, Maxim, Us, and Dwell.

Now if only Amazon would make good on their promise to release a Kindle app for the PlayBook.

That might not be as likely as it once was, what with the arrival of the Kindle Fire late last year. Still, Amazon’s looking to make money selling content to people too, so there’s always a chance Kindle will make its way to App World.

In the meantime, avid readers have to make do with the Kobo app for eBooks and Zinio for magazines a one-two e-Reading punch on your PlayBook.