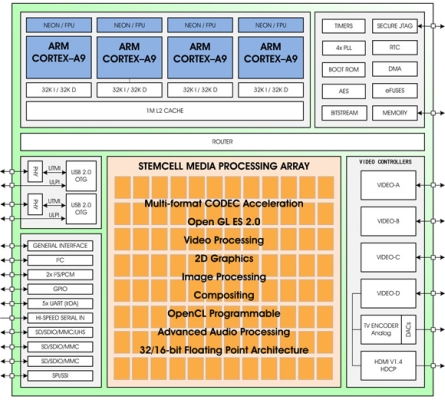 ZiiLabs is introducing a speedy new mobile processor for Android tablets. The ZMS-40 is an ARM Cortex-A9 quad-core processor with a clock speed of 1.5 GHz. The company says it will be twice as powerful as last year’s ZMS-20, while using as little has half as much electricity.

In terms of everyday use, ZiiLabs says the new chip can be used in tablets and other devices with 2560 x 1600 pixel displays.

The new chips are designed to work with Google Android 4.0 and the company has a range of Android apps which take advantage of the chip’s features including a photo browser, a camera app that supports real-time 3D effects and panoramic photo capture, and a video player with support for playing videos in reverse or adjusting playback speed.

You can also hook up a tablet with the ZMS-40 chip to a TV or other external display and view different apps on the TV and the tablet. For instance you an watch a video and surf the web or play a game at the same time.