Zettaly’s Avy is a stereo speaker with a 7-hour battery, support for WiFi and Bluetooth, and a 7 inch touchscreen display between the speakers. It runs Google Android software, and while you can pair the speaker with your phone and use it like any Bluteooth speaker, you don’t need a separate device to use this speaker, since it supports apps such as Spotify, TuneIn Radio, and Google Play Music.

Zetally is showing off the Avy at the Consumer Electronics Show this week, but if you want to buy one you’ll have to go through Kickstarter, at least initially. The company is raising money to bring the Avy to market through the crowdfunding site. 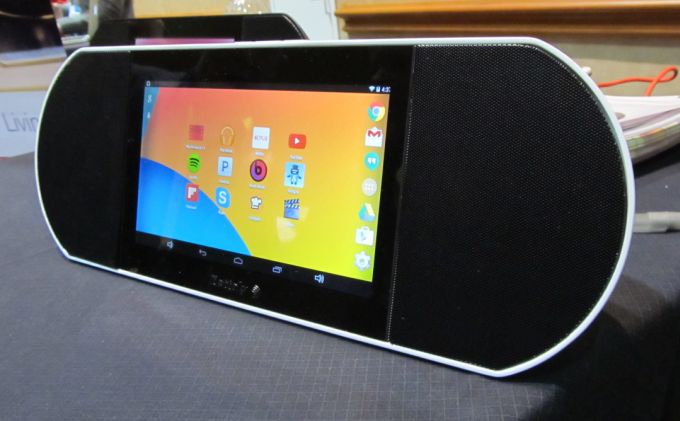 The company expects to deliver the Avy to Kickstarter backers in May. Prices will normally start at $169 for a model with 8GB of storage, but Kicsktarter backers can reserve one for lower prices.

The demo unit I saw was running Android 4.4, but Zetally expects to upgrade the software to Android 5.0 by the time the device is ready to launch.

It weighs about 2.2 pounds and measures 13.8″ x 4.6″ x 4.7″.  There are microSD card, HDMI, and micro USB port on the back, and the device can run for up to 7 hours when unplugged if you’re listening to music. Playing videos will shorten the run time somewhat.

This isn’t the first Android-tablet-in-a-speaker-case I’ve seen. But despite relatively modest specs (including the low-res screen and 1GB of RAM), it could be an interesting option for folks looking for an internet-connected clock radio on steroids.