Zero Devices sells a range of miniature PCs designed to run Google Android, including small media center devices, in-car entertainment systems, and PC-on-a-stick style devices. The company’s next mini PC could be the most powerful yet.

At first glance, the device looks a lot like the UG802 mini PC, but it appears to have 1 USB port for charging and two more for connecting peripherals. It also has twice as much storage space as the UG802, and it has an HDMI port instead of an HDMI connector. In other words, you don’t plug the Z2C mini PC directly into your TV or monitor’s HDMI port. Instead you use a cable to connect the two.

Zero Devices hasn’t yet announced the price or release date for the new Z2C, but given the prices of similar devices, I’d be surprised if it sold for more than $90.

While the Z2C has a significantly more powerful processor than the popular MK802 mini PC (which has an Allwinner A10 ARM Cortex-A8 single core CPU), the MK802 excels in at least one area. It can easily run Ubuntu, Fedora, and other Linux-based operating systems.

Rockchip doesn’t provide support for Linux. Update: But that hasn’t stopped independent developers from working to port Ubuntu to run on RK3066 devices. 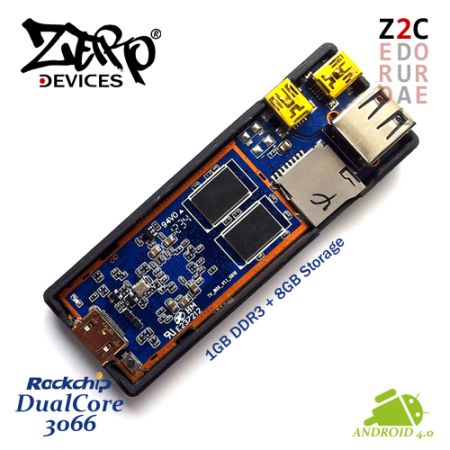