Apple’s AirPower wireless charger was supposed to be a charging pad that could charge multiple devices placed anywhere on top. But after spending two years trying to perfect the design, Apple scrapped the project earlier this year.

Now a company called ZENS is getting ready to launch a new wireless charging pad that works a lot like the ill-fated AirPower.

It’s called the ZENS Liberty, and it’s a dual-device charger with 16 overlapping charging coils. That means you should be ale to place your gadgets anywhere on the pad to charge them — no fiddling to find the sweet spot required. 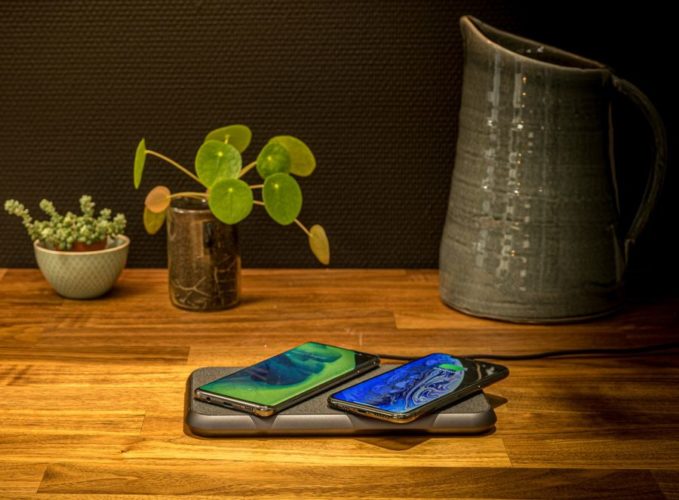 Each of the 16 charging coils has an output of 30 watts, allowing you to use the charging pad for fast charging with Apple and Samsung devices, among other products.

There’s also a 2.4A USB port that you can use to plug in any gadget that supports wired USB charging.

You plug in the charging pad itself using a 45W power adapter and USB-C cable. Interestingly, the USB port is top-facing, not bottom-facing. ZENS says the reason for that will be explained when the company unveils a “new, world’s first product” in the future.

The basic ZENS Liberty wireless charger has an aluminum body and a “woolen upholstery textile Atlas by Kvadrat) top cover. There’s also an optional limited edition ZENS Liberty Glass edition model that has a clear cover so you can see the 16 charging coils. That model will sell for $180.

While this isn’t the first dual-device charger to launch, it does seem like the closest thing to date to Apple’s AirPower. Samsung’s $100 Wireless Charger Duo, for example, can charge two devices at once. But you’ll need to place your gadgets on precisely the right points in order to charge them. The same goes for Mophie’s dual wireless charging pad, which sells for $80.

Is the ability to just drop your phone on a charging pad without needing to check and make sure it’s actually charging worth the extra cost? I guess that’s up to you to decide.

via Android Police and MacRumors