Zotac plans to launch a range of new mini computers this year, including its first models with ARM-based chips, new powerful models with Intel Iris Pro graphics, and an unusual device called the ZBOX 01520 which looks like the ill-fated Google Nexus Q, but rolls up the guts of a tiny PC and packs them into a ball that can sit on you desk or TV stand. 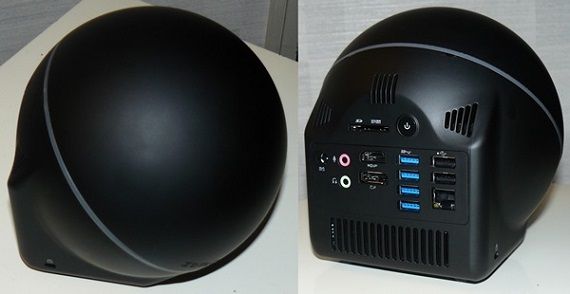 It also has room for 2 sticks of RAM, a 2.5 inch hard drive or solid state drive and there’s an mSATA port which you can also use for storage.

Like most ZBOX models, the 01520 will come in two versions. The standard unit ships without any memory or storage while the ZBOX 01520 Plus will have 4GB of memory and a 500GB hard drive. The system supports up to 16GB of RAM and about as much storage as you can fit in the case, and the Plus version doesn’t come with an operating system pre-loaded, so you might be better off just adding your own components.

Zotac hasn’t announced the price or release date for the new model yet, and somehow I missed it when visiting their booth at CES this week. But the folks at Gadget Unit stopped by and shot a short video.