Amazon and Google both offer cheap devices that let you stream internet video on your TV. But while the Google Chromecast uses your phone, tablet, or desktop web browser as a remote control, the Amazon Fire TV and Fire TV Stick both with its own physical remote (although you can also install a virtual remote app on your phone or tablet).

Want to get the Chromecast experience on a Fire TV or Fire TV Stick? YouMap Cast Receiver is an app that brings Google Cast support to Amazon’s TV devices.

Update: The app has been removed from the Amazon Appstore.

Update 2: It’s been relisted under a new name, due to a trademark dispute. The new version is called rPlay.

Unfortunately YouMap does not support videos with DRM, so you can stream trailers or music from Google Play. But you won’t be able to movies or TV shows from Google Play. So if that’s what you’re trying to do, you might want to just spend the $35 on a real Chromecast.

Want to make sure the app works before spending money on it? AFTV News notes that you can download and sideload an APK file that should work until August 31st, 2015.

Sideloading apps on a Fire TV isn’t hard, but it does take a few steps. In a nutshell, the process involves using the ADB tool from the Google Android Software Developer Kit to connect to your Fire TV Stick wirelessly.

Follow steps 1 – 6 in our guide for installing Kodi on the Fire TV Stick, and at the end, put the APK in the same directory as your adb file and type “adb install YouMapCastReceiver.apk” to install the app on the Fire TV. 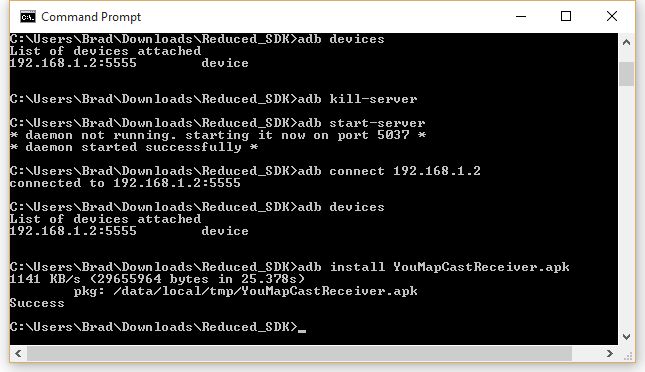 Then all you need to do is restart the Fire TV and the app should be running.

You can edit the settings by going to Settings/Applications/Manage Installed Applications/YouMap and launching the program. This lets you change the display name of your device, choose whether to save recordings of screen mirroring sessions, display notifications, and start the process every time the Fire TV boots.

If this all sounds too complicated — and you don’t want to buy a Chromecast — you can hope that developers just add support for Amazon’s own Chromecast-like features to their apps. Amazon recently added support for a new protocol called Fling to the Fire TV and Fire TV Stick.

Fling lets you tap a button in a mobile app to stream content to a Fire TV device, and there are tools that make it easy for developers that already support Google Cast to add Fling support to their apps.