Google’s Chrome browser for Android makes it easy to open multiple web pages at once thanks to support for tabs. But the company has an annoying habit of changing the way tabs are arranged. And if you want to view multiple pages at the same time, you’re out of luck, since you can’t currently run Chrome in multiple windows the way you can on desktop operating systems.

That could change when Android 12 is released this fall. Xda-developers found code changes indicating Chrome for Android 12 will support running multiple instances of the browser at the same time. 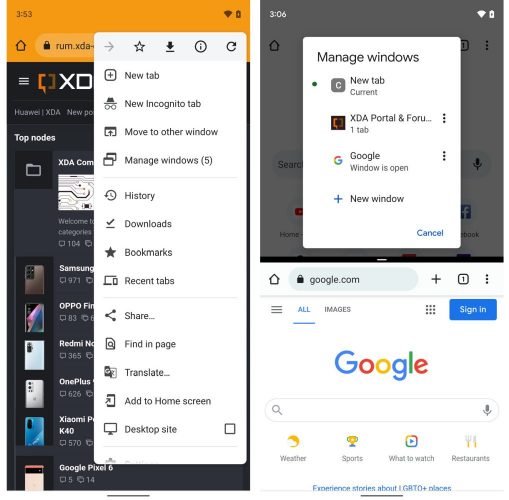 In addition to opening a link or a blank page in a new tab, Chrome for Android 12 will have a “new window” button that allows you to open a second instance of the browser. And you can keep going until you have as many as five windows opened.

This feature will apparently only be available when you’re using split-screen mode. But once you’ve got two or more Chrome windows opened, there will be a “Manage windows” option that lists all of your active windows, shows which one is in focus, and how many tabs are open in each.

You can also navigate between windows using Android’s recent apps view. Each window basically shows up as a separate app.

Once you open a few windows, the information will be saved until you close them, so if you reboot your phone and re-open the Chrome web browser, your windows should re-populate.

According to xda-developers, the feature is already available for devices running a pre-release build of Android 12, but you’ll need a beta, dev, or canary channel version of the Chrome web browser to try it out.