Youku Tudou is China’s answer to YouTube. Now the online video site is getting into the consumer hardware business.

Starting in January Youku will begin selling a tablet, a smart TV box, and a WiFi router. 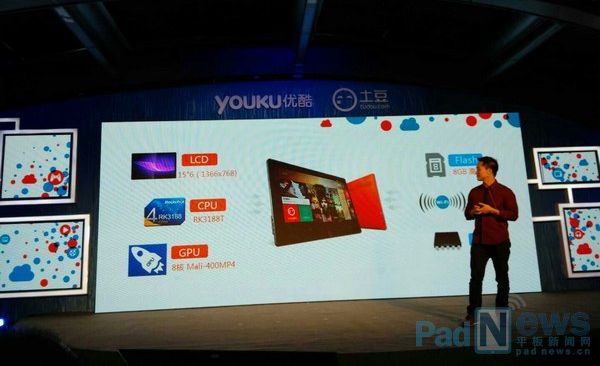 While the TV box will initially ship with Android, Youku says it plans to offer a software update to Alibaba’s Aliyun OS in the future (which will bring a suite of apps for music streaming, online shopping and other features). The move makes sense in China, where the Google Play Store and other Google services aren’t widely available.

Youku’s tablet will have a 15.6 inch screen and run Google Android. While you’ll be able to use it for web surfing and gaming it’s pretty clear that the company is positioning the big-screened tablet first and foremost as a device for streaming video… from sites such as Youku.

Padnews reports the tablet features a Rockchip RK3188T processor and a 10-point capacitive touch screen, which seem like decent choices. But it has just 8GB of storage and features a 1366 x 768 pixel display, which seems like an odd choice for a big-screened tablet designed to stream video. Hopefully that means the tablet will be very inexpesnvie.

Youku’s TV box will also have an RK3288 processor with 4K video support. It’s expected to sell for about $65.

via Tech in Asia

One reply on “Youku to launch a tablet, media streamer, and router in China”