Microsoft’s long-rumored Surface Phone may still be nothing but a rumor… but if you happen to be one of the folks who bought the company’s last smartphone, it looks like you can now turn the Lumia 950 XL into a full-fledged PC.

The phone originally shipped in 2015 with Windows 10 Mobile software and features a Qualcomm Snapdragon 810 processor, 3GB of RAM, and 32GB of storage.

Hacker Ben | imbushuo has been working to bring a modified UEFI bootloader to the phone, allowing you to replace the outdated (and all-but-dead) operating system, and now he’s released tools and instructions that let you load Windows 10 on ARM or Linux. 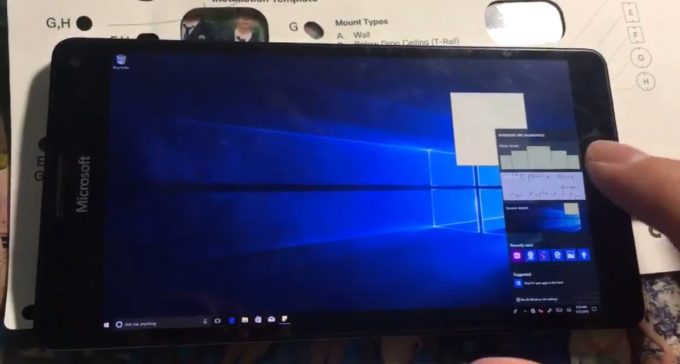 The process isn’t for beginners, and takes a bit of technical know-how. But basically it involves using WPInternals 2.4 to unlock the phone, then loading some tools that will let you load the recently-released desktop version of Windows 10 built for devices with ARM-based processors.

Theoretically, the same technique should let you run a GNU/Linux operating system like Ubuntu, Debian, or Arch on the Lumia 950 XL, but there’s still some work that would need to be done in order for a Linux distribution to recognize all of the phone’s hardware.

The phone that can replace your PC(?) pic.twitter.com/OC9XBeWkdT

It’s also worth keeping in mind that while Windows 10 on ARM allows you to run Win32 apps developed for computers with x86 processors, it relies on emulation to do that. Early reviews suggest that computers with Qualcomm Snapdragon 835 chips are sluggish when running x86 apps… so don’t expect stellar performance from a phone with a Qualcomm chip that’s several generations older than that. The operating system also isn’t really designed for devices with 5.7 inch displays, so some menus, icons, and other items may be a little too tiny to be useful.

Still, this opens the door for breathing some sort of new life into an aging phone by making it possible to run up-to-date Universal Windows Platform apps that are compiled to run natively on devices with ARM-based processors. At a time when many developers have stopped making Windows 10 Mobile versions of their apps, that’s… something.

On the other hand, Windows 10 on ARM isn’t really designed to run on phones, so you may not be able to do some basic things… like make phone calls.

Right now, the best reason for running Windows 10 on a Lumia 950 XL is probably “because I can.”  But it’s always exciting to see independent developers add new capabilities to old devices in this way.