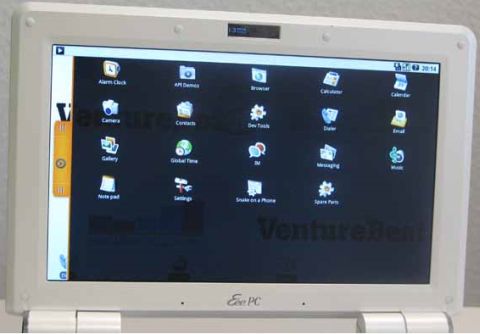 The folks at VentureBeat ported Google’s Android operating system to run on an Asus Eee PC 1000H netbook. Good for them. The OS was originally designed for cellphones and now they’ve shown that it’s possible to run it on a full (but portable) computer like the Eee PC 1000H. That’s pretty cool.

But VentureBeat then goes on to conclude that the fact that you can run Android on a netbook means that Google and laptop manufacturers will be bringing Android-powered laptops to market by 2010. And the evidence just doesn’t support that claim at the moment. I’m not saying it won’t happen. I’m just saying it’s a bit early to jump to that conclusion.

Android is an open source, Linux-based operating system designed to run on devices with ARM processors. There are plenty of Linux drivers out there for Intel processors, so it’s hardly shocking that the VentureBeat guys were able to find the drivers needed to port the operating system. In fact, if they really wanted to, they could have ported the versino of Linux used on the Sharp Zaurus line of PDAs to run on a netbook. I’m sure it would run great. After all, it was designed for devices with slower processors and less RAM.

But you know what? It doesn’t make any sense. Becuase operating systems designed for cellphones are stripped down to their bare bones in order to function well on devices with tiny displays, pokey processors, and miniscule amounts of storage. And while a netbook like the Asus Eee PC 1000H certainly isn’t as fast, powerful, or large as your Voodoo gaming laptop, it’s still a full laptop and there are plenty of full fledged operating systems capable of running on it, from Windows XP to dozens of versions of Linux, to OS X (unofficially, of course).

Sure, you can run Google Android on a netbook. But it comes with a media player and a web browser and not much else. Or you could run Ubuntu. It comes with a media player, web browser, FTP client, office suite, and dozens of other apps preloaded. Oh yeah, and thousands of programs that can be installed with an internet connection and the click of a button. Yes, it’s wholly possible that Google and third party developers will create applications that make Google Android more useful over the next year or so. But it still has a lot of catching up to do with even the most basic Linux environments, like Puppy Linux. So I can’t imagine why anyone would want to run it on a netbook.

24 replies on “You can run Android on a netbook, but why would you want to?”