Folks have been jailbreaking iPhones for years in an attempt to gain more control over their devices and install apps that wouldn’t otherwise be supported. But Apple doesn’t make it easy — the company typically patches the security vulnerabilities hackers use for jailbreaking shortly after they’re discovered.

That said the checkm8 exploit discovered last year still work on most older iPhones because it works on the boot ROM rather than the operating system.

The checkra1n utility lets you use the exploit to jailbreak devices running iOS 12.3 or later using Mac or Linux computer… or, as it turns out, an Android smartphone. 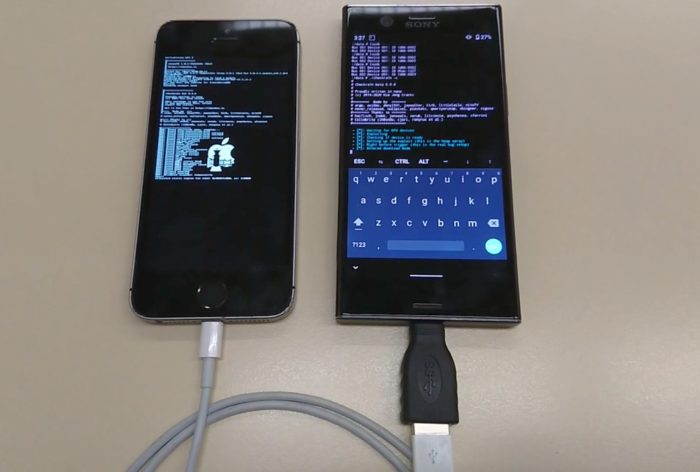 Redditor /u/stblr discovered that it’s possible to jailbreak an iPhone by connecting it to a rooted Android device with a lighting-to-USB cable and then running some commands from a terminal app on the Android phone.

This is particularly useful when you consider that checkra1n is what’s considered a tethered jailbreak. While the utility will let you gain access to the root file system of an iOS device, as soon as you reboot your phone, tablet, or other device you’ll lose root until you run checkra1n again.

The ability to run checkra1n using nothing but a phone makes it possible to jailbreak or re-jailbreak an iPhone on the go without lugging around a laptop. Of course… you still need to lug around two phones and a cable to connect them to one another.

Stblr recommends using an Android phone with “newer Linux and Android versions,” since they’re more likely to work. The phone shown in stblr’s short video is a Sony Xperia XZ1 Compact with Android 10, Linux kernel 4.14 and the phone was rooted using Magisk 20.3.

You can find other prerequisites and step-by-step instructions at reddit.

[News] It is possible to run checkra1n from an Android device! from r/jailbreak