The Microsoft Lumia 950 XL was released in 2015 as one of Microsoft’s last smartphones to ship with Windows 10 Mobile software. These days Microsoft is focusing its mobile efforts on Android (by releasing apps for Android phones as well as its own Android-powered phone).

Meanwhile, hackers have been focusing on how to load other operating systems (including Windows 10) on old Microsoft Lumia phones. And this week, week developer Gustave Monce (@gus33000 on Twitter) released a build of Android 12 for the Lumia 950 XL. 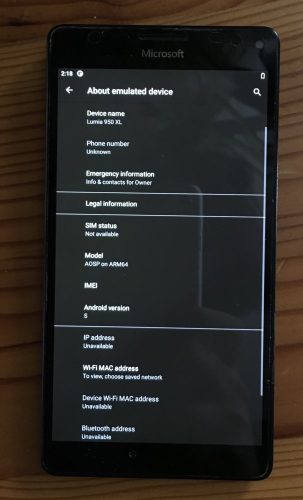 The software is still very much a work in progress in several key ways. First, Android 12 isn’t officially out yet. Google has released a couple of developer preview builds, but the stable version of the operating system, code-named Android S, won’t be available until this fall.

Second, while gus3300 says this build for the Lumia 950 XL includes support for the phone’s touchscreen display and for Bluetooth, it lacks support for hardware-accelerated graphics, which means that the user interface will be slow and probably not much use for things like gaming or playing videos.

It can also take a long time to install – it’s apparently normal for the process to look like it’s stuck for about 12 minutes.

That said, if you’ve got an old Lumia 950 XL phone lying around, don’t mind potentially bricking it, and understand how to flash FFU files, then maybe one day you’ll be able to use your old phone as an Android device.

Or you could try installing postmarketOS if you’d rather use Linux… but at this point most of the phone’s hardware is unsupported by that operating system as well.