Smartphone screens can be energy hogs, and they can be tough to see in direct sunlight. One solution would be to use an E Ink screen instead of a traditional LCD display — but while E Ink screens use far less power, they usually have slow screen refresh rates and don’t do a good job of displaying colors.

Yota Devices has split the difference with their first phone. There’s a 4.3 inch color LCD on one side and a 4.3 inch E Ink screen on the back. You can use the LCD touchscreen to interact with the Android phone just like you would any other modern smartphone. The E Ink screen can show notifications or function as an eReader screen — allowing you to get days of battery life instead of hours (assuming you never use the LCD screen to surf the web, watch video, play games, etc).

The Yotaphone’s been in development for a few years, and now it’s finally available for purchase in Russia and parts of Europe, where it sells for 499 Euros. 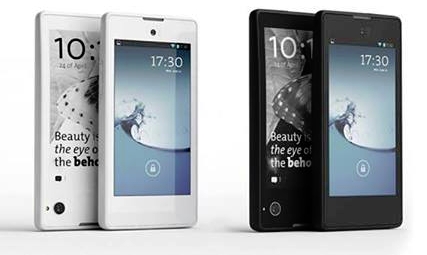 That’s a reasonable price for an unlocked high-end smartphone these days, but if it weren’t for the dual displays, the Yotaphone would look more like a mid-range device. It has the kind of specs you would have expected from a top tier phone in 2012, but it’s launching at the end of 2013.

The Yotaphone features a Qualcomm Snapdragon S4 dual-core processor and a 4.3 inch, 1280 x 720 pixel color LCD, for instance. It does have a few premium touches including 2GB of RAM, and a 13MP rear camera as well as support for 4G LTE as well as WiFi and GPS.

It also has a 1MP front-facing camera and a 1800mAh battery. But it’s the 640 a 360 pixel E Ink display on the back that really sets this phone apart — and for folks that spend a lot of time reading on their phones, that might be enough.

At this point you can’t quite use the E Ink screen like a normal eReader: It doesn’t support eBook apps. But you can view email messages, Twitter notifications, RSS feeds, and other data on the back. You can also set a custom wallpaper to give your phone a custom look and feel. Since E Ink displays only draw power when the page is refreshed, you won’t waste any extra power by giving the back of your phone a custom, grayscale skin.

Unfortunately there’s still no word on when you’ll be able to buy a Yotaphone in the US — but the market for unlocked phones isn’t as strong in the States as it is in other countries, and Yota is relatively new the smartphone space and might not have the clout to work with US wireless carriers to offer subsidized models yet.

The good news is that Engadget reports future versions of the phone could be cheaper if Yota sells enough to negotiate better prices for components such as the Qualcomm chips used in its handsets.