There are a few ways to get better battery life from a smartphone. You could stuff a huge battery in the case. Or you could use a less power-hungry display. The Yotaphone takes the latter approach — by giving you two displays.

On the front of the smartphone there’s a full color touchscreen display which probably uses more power than anything else in the phone. But on the back there’s a low-power, black and white ePaper display that only uses power when you refresh the screen.

The ePaper screen lets you view messages, websites, eBooks or other content easily in direct sunlight, and it lets you see information at a glance without using the battery sucking color screen. 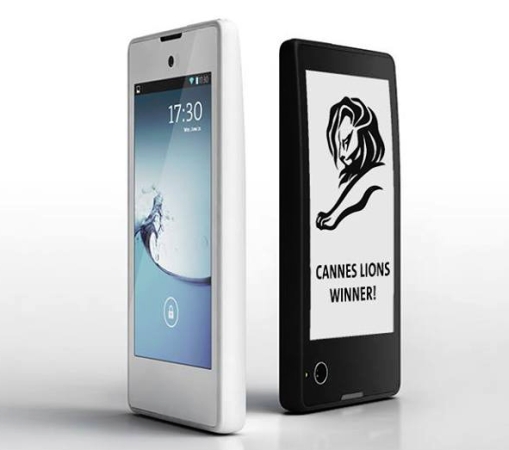 The makers of the Yotaphone have been showing off prototypes for months, and now they say it’ll be ready to launch by the end of the year. Details are a bit thin at the moment, but Golem.de reports it’ll be available in Germany for around 500 Euros in November.

While that sounds like a lot of money if you’re used to US smartphone prices (which are kept “low” by tacking on a 2-year service plan), it’s about what you’d pay for other high-end Android phones in Europe.

The Yotaphone features a Qualcomm Snapdragon S4 Pro dual-core processor, 2GB of RAM, 32GB of storage, a 12MP camera, WiFi, Bluetooth, 3G, 4G LTE, GPS and GLONASS, and an 1800mAh battery. It runs Google Android, and the developers hope to ship it with the “latest” version of Android, which suggests it’ll feature Android 4.3 when it hits the market, although it’s currently running Android 4.2.

The color display is a 4.3 inch, 1280 x 720 pixel LCD display, while the ePaper screen on the other side is a 640 x 360 pixel black and white screen. Both are covered with scratch-resistant Gorilla Glass.

Yotaphone will offer the smartphone in black or white.

Or you could just buy a PocketBook ePaper case for a Samsung Galaxy S4 or an Alcatel OneTouch Hero smartphone with an optional ePaper cover.