Russian phone company Yota plans to unveil its next dual-screen smartphone on December 3rd. Like last year’s Yotaphone, the new Yotaphone 2 appears to have a color screen on one side and an ePaper display on the other.

But earlier this year we learned that the new model would be a little different. 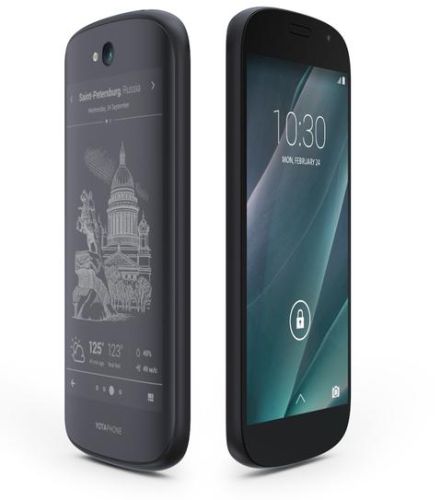 Detailed specs for the Yotaphone 2 aren’t yet available, but the picture Yota is sharing ahead of the official launch sure looks a lot like the prototype the company was showing off earlier this year.

That prototype had a 5 inch, full HD AMOLED display on one side of the pone and a 4.7 inch, 960 x 540 pixel E Ink screen on the reverse side. Both displays featured touchscreens, while the first-gen Yota only had a touch panel for the color screen.

The prototype had 2GB of RAM, a Qualcomm Snapdragon 800 processor, 802.11ac WiFi, and Bluetooth 4.0. It’s possible some of those features may be different now: Yota started showing its prototype in February so there’s been plenty of time to make changes.

Since ePaper displays tend to use a lot less power than color screens, a device like the Yotaphone 2 could offer long battery life if you keep the color display off while reading eBooks or other text-heavy content.

The ePaper screen on the first-gen Yotaphone could only be used in a few ways. You could view email messages or other notifications or set a custom wallpaper to decorate the back of your phone. Since the new Yotaphone 2 is expected to have dual touchscreens, it’s possible you may be able to do more with the low-power, black and white screen.

Yota is based in Russia and tends to sell its devices in Europe and the Middle East. It’s not clear if or when the Yotaphone 2 will be available in the United States.