One of the few companies to release a smartphone with an E Ink display (and a full color screen on the other side of the phone) is preparing to launch version number three.

We already knew that the YotaPhone 3 (or Yota3) would likely have a 5.5 inch full HD AMOLED display on one side and a 5.2 inch, 720p E Ink screen on the other.

Now a series of images posted to vk.com allegedly show what the phone will look like. A few more specs have also been revealed… allegedly. Take everything with a grain of salt until we see an official announcement. 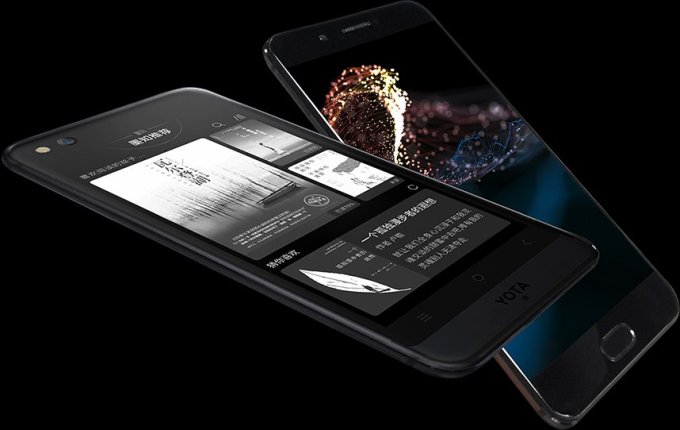 The phone is said to feature a Qualcomm octa-core processor, 4GB of RAM, and 128GB of storage. That’s consistent with what we’d previously heard: that the phone would have a Snapdragon 625 chip and 4GB of memory.

Other features are expected to include a USB Type-C port, dual SIM support (including one SIM card slot that can also function as a microSD card reader), a fingerprint sensor, a 12MP rear camera, a 13MP front camera, and a 3,200 mAh battery.

Clearly the most interesting thing about the phone is its dual display setup. Since Android doesn’t have native support for this sort of second screen (or for functioning properly on an E Ink display with a relatively low screen refresh rate), Yota Devices ships its phones with custom software to take advantage of the extra screen. In this case, the YotaPhone 3 is expected to come with a new Android-based operating system called Yota OS 3.0.

The leaked images show the E Ink display being used to display a range of data including WeChat messages, stock prices, news items, time, weather, and a pedometer step count.

E Ink screens have a few interesting benefits including excellent visibility even in direct sunlight, low power consumption, and the ability to display an image indefinitely, even after your battery dies. While there are color E Ink displays, the most common screens of this type are grayscale and have relatively low screen refresh rates. That makes them ideal for reading (which is why they’re commonly used in Kindle and NOOK devices, as well as other gadgets designed specifically for reading eBooks). But they’re imperfect solutions if you want to watch videos, look at pictures, or generally do anything that requires viewing a lot of frames per second and/or vivid colors.

A handful of other phone makers have borrowed Yota’s idea and released their own dual-screen E Ink devices over the past few years, but the idea hasn’t exactly become widespread.

Maybe third time’s a charm for Yota Devices? The company has been trying to bring a YotaPhone 3 to market for a couple of years, and a majority stake in the Russian company was acquired by Hong Kong-based Rex Global Entertainment Holdings in 2015. Now it looks like the YotaPhone 3 is finally almost ready to go. What remains to be seen is whether there’s still a market for this sort of device outside of the handful of ePaper enthusiasts who snatched up the handful of original YotaPhone and YotaPhone 2 units released in years past.