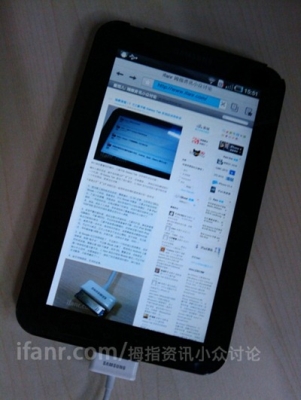 Any day now Samsung is going to officially introduce the world to its 7 inch Android tablet, but until then we’ll have to rely on leaked photos and videos of the Samsung Galaxy Tab for our daily fix. Today’s leak comes from ifanr, a Chinese web site which snagged a series of hands-on photos with the Samsung tablet.

The device appears to be running Google Android 2.2 with a custom keyboard. It seems to have a 7 inch, 1024 x 600 pixel display, which is a higher resolution screen than most 7 inch Android tablets have. The Samsung Galaxy Tab also reportedly has a 3.2MP webcam, as well as a front-facing QVGA camera. It also has 802.11b/g/n WiFi, 3G capabilities, and GPS. The 3G access gives me hope that the tablet will come with full access to the Google Android Market.

You can find more photos at ifanr.

3 replies on “Yet another Samsung Galaxy Tab leak – photos”