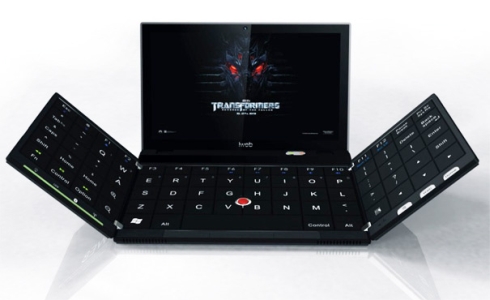 Want a netbook that’s small and light enough to throw in your back but which has a full sized keyboard that’s actually comfortable to type on — and might even have room for a numeric keypard? Designer Yang Yongchang thinks he knows how to do it: Just build a folding keyboard into your netbook.

Yanko Design has a gallery of Yongchang’s netbook concept, which packs a ThinkPad-like pointing stick into the middle of the keyboard in lieu of a touchpad. The idea is that you could have the benefits of a small netbook with a full sized (albeit kind of funny looking) keyboard.this particular concept is for a device with a 6.5 inch touchscreen display, which is almost pocketable.

And while it might be nice to also have an expandable display, like some people have suggested, a folding keyboard is probably much cheaper to implement. After all, companies have been pumping out folding keyboards for use with PDAs and smartphones for years. How hard could it be to build one into a laptop?

7 replies on “Yet another concept netbook with a folding keyboard”