Gamers have been using liquid cooling to keep their high-power gaming PCs from overheating for years… but liquid cooling takes a lot of space, so it’s usually reserved for desktops, although it sometimes plays a role in gaming laptops (or even phones).

But PC maker XMG has found a way to offer a high-performance liquid cooling system for laptops: with the help of an external enclosure. The XMG Neo 15 is a gaming laptop that’s designed to plug into an optional XMG Oasis external cooling system when you want additional cooling power. 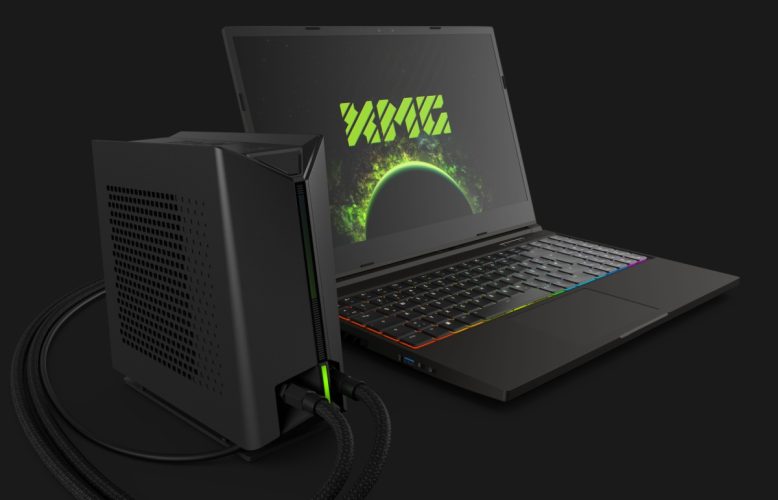 In order to keep things running smoothly when gaming on the go, the laptop has a cooling system that includes liquid metal applied to the CPU and 71-blade fans.

But you can also hook up the optional XMG Oasis external cooler which is an 8″ x 7.3″ x 3″ box with a 120mm radiator, a 120mm fan, a pump, and a liquid reservoir. These connect to a metal pipe in the laptop via a 2-in-1 quick release connector on the back of the notebook.

It communicates with the laptop via Bluetooth so that all of your computer’s USB ports remain available when the cooler is use, and when paired the XMG Neo 15 laptop will should register the enhanced cooling and adjust the profile of the laptop’s built-in fans. XMG says during testing, it was able to drop the temperature of the laptop’s CPU and graphics card as much as 20°C while the notebook’s fans were only spinning at about half their top speeds, which means you get plenty of cooling performance and a laptop that stays fairly quiet.

The XMG Oasis cooler is designed to be portable. It’s compact and weighs just about 2.6 pounds when empty or 3.1 pounds when filled with the 230 milliliters of cooling liquid it takes for the system to function. And the Oasis can be powered by the XMG Neo’s charger.

When you disconnect the cooler, about 20ml of liquid will remain inside the metal pipe in the laptop and thanks to a rubber-sealed closure, that liquid shouldn’t leak. But XMG says it’s still probably safer to empty the laptop of liquid before transporting it in order reduce the risk of water spilling or freezing and causing damage in cold temperatures. You can empty the liquid by holding the laptop horizontally with the keyboard facing upward, then slowly tilting it backward over a sink or bowl to release the liquid. 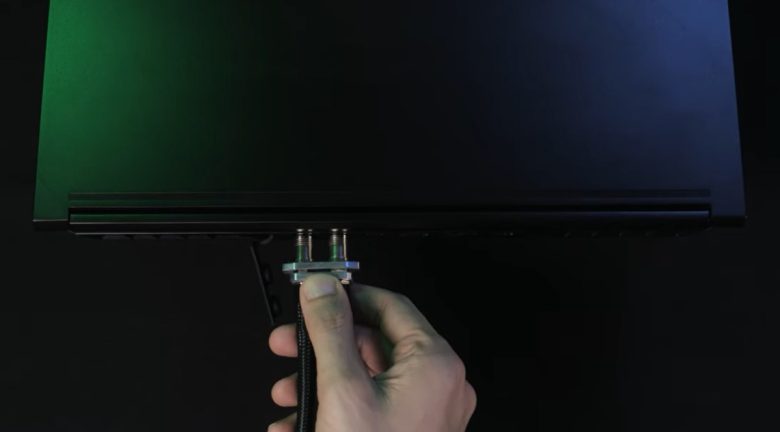 And because this is a gaming accessory, of course the cooler has RGB lights that can be programmed via software.

Since XMG first unveiled the Oasis system during the Consumer Electronics Show, the company says it’s been working to improve the performance with tweaks including a tighter quick-release connection for improved stability and a better seal, a PCB that’s been optimized to avoid electromagnetic noise, and support for OTA firmware updates.

While the XMG Neo 15 will be the first laptop to support the Oasis liquid cooling accessory, XMG says it plans to add support to some additional laptops in the future. But support will be limited to new laptops only, as there’s no way to retrofit the mainboard of older laptops to work with the Oasis cooler.

The XMG Neo 15 is available for pre-order with prices starting at about € 1,999, while the XMG Oasis cooler is sells for € 200 or less. Both are expected to begin shipping in mid-March, 2022.