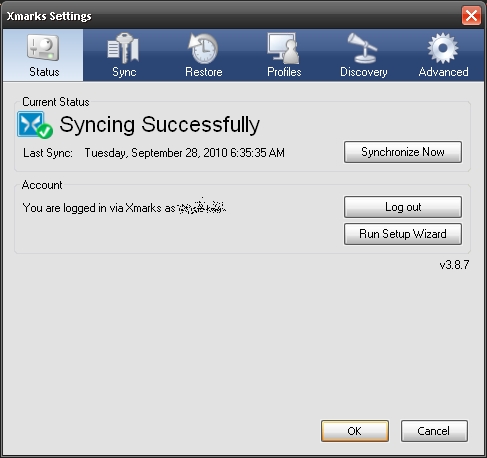 Mozilla is building bookmark, password, and preference synchronization for Firefox into a product called Firefox Sync. You can use it to keep your browser  work, home, and other computers in sync. Opera has allowed users to synchronize their data for years, and the Google Chrome browser now has similar features baked in. But the grandaddy of all bookmark synchronization services is Xmarks (formerly known as Foxmarks). Sadly, Xmarks co-founder Todd Agulnick has announced that the service will close in about 90 days.

I’ve been using Xmarks for years. It’s great for office workers who have to sync their home and work computer bookmarks and passwords. It’s even better for users with multiple computers around the house. And it’s ideal for computer reviewers, who are constantly testing out new laptops and don’t feel like spending a lot of time customizing them before kicking the tires, writing reviews, and ultimately returning them to their manufacturers.

While many other browsers are building bookmark synchronization technology into their products, Xmarks is one of the only tools that let users synchronize data between browsers. Want to make sure Firefox, Safari, and Google Chrome all have the same site passwords and bookmarks? Xmarks can do that.

But building one of the best free services around wasn’t apparently enough of a business model, because after 4 years Agulnick says the company had 2 million users synching data across 5 million computers… and very little revenue. The company tried taking anonymous user data to build a search engine or to improve Google Search results, with little practical effect. Xmarks could start charging for service, but with browser makers building their own synchronization services, it’s likely that only a small percentage of users would pay.

So after failing to find a buyer for the company, Xmarks will close up shop in a few months and I’ll have to decide whether to rely on a browser synchronization tool that only works with Firefox, or Chrome, or another browser, or whether to look for a different third party solution and hope that it too doesn’t close up shop.

I have to admit, since I started using LastPass, a web-based password manager I haven’t needed Xmarks quite as much. But LastPass is intended to generate and keep passwords secure, not to serve as a bookmark manager. And while LastPass provides a freemium service, in light of Xmarks’ passing, I have to ask myself whether LastPass will be around in 4 years.

Update: Since making the announcement, the folks at Xmarks say there’s been some interest in other companies acquiring their assets and continuing to run the service. Xmarks is also considering for the first time the possibility of charging for a premium service as a way to keep things going, and has set up a pledge bank to gauge interest. You don’t have to actually pay anything now, but if enough people let the company know they’d be willing to pay $10 or so per year, that may do… something. Xmarks is shooting for 100,000 pledges, which would be about 5 percent of the company’s userbase. That may sound pretty low, but you try getting people who are used to a free service to commit to paying for it.

Update 2: It looks like Xmarks has found a buyer, which means the service will live on, with both free and premium offerings.