Some folks seem to wish the front of a smartphone was nothing but screen, seeing bezels as wasted space. We’re not quite there yet… but Xiaomi’s upcoming Mi Mix smartphone comes pretty close.

The phone has a 6.4 inch display and 91.3 percent screen-to-body ratio. That’s thanks to ultra-slim bezels around the top and sides, and a relatively small one below the screen.

Xiaomi says that allows the company to squeeze that large screen into a phone that’s about the size of a typical 5.7 inch model. But the slim bezels aren’t the only things that make the Mi Mix stand out.

The phone has a ceramic body including a ceramic frame and buttons. Since there’s no room for an earpiece, camera, or proximity sensor at the top of the phone, Xiaomi had to rethink those items. The camera is on the bottom. There’s an ultrasonic proximity sensor instead of the usual infrared one. And the earpiece is replaced with a “cantilever piezoelectric ceramic” system that should let you hear without a traditional speaker.

Xiaomi is calling the Mi Mix a concept phone, but the company does plan to sell it in China in November for about $516 and up.

Other features include support for Qualcomm Quick Charge 4.0, 192kHz/24-bit audio, NFC, a 5MP front camera, and phase detection auto-focus for the rear camera. There’s a fingerprint sensor on the back of the phone, an IR blaster, 802.11ac WiFi and Bluetooth 4.2.

One thing the phone doesn’t have (aside from the earpiece) is an SD card slot. 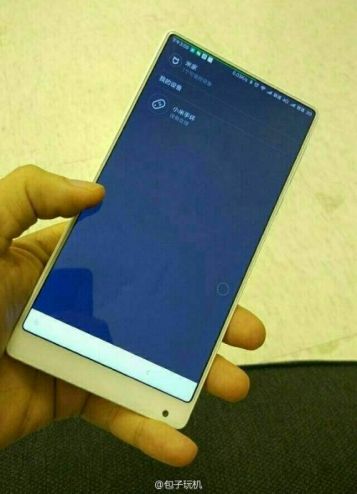 It’s worth pointing out that like a lot of slim-bezeled phones, Xiaomi has released some press pictures which make it look almost like the phone has no bezels at all. But hands-on pictures and videos show that they exist… they’re just really, really thin.