Apple’s AirDrop offers a simple way to share photos, documents, and other files from an iPhone to another nearby iOS device. Just hit the share icon, select the user you want to send to, and Apple will set up a device-to-device transfer.

Google attempted to launch something similar called Android Beam way back in 2011 with the launch of Android 4.0 Ice Cream Sandwich. But it never caught on as widely and relied on NFC for pairing (which meant some phones didn’t support it, and required phones to be tapped together to work).

Android Beam is being phased out with Android Q and Google is instead adding a new “Fast Share” device-to-device file transfer feature that uses Bluetooth for pairing and WiFi for data. But it may be tied to Google Play Services, which isn’t used by smartphones in China, one of the top global markers for smartphones.

So some of the top Chinese phone makers are partnering on their own alternative. 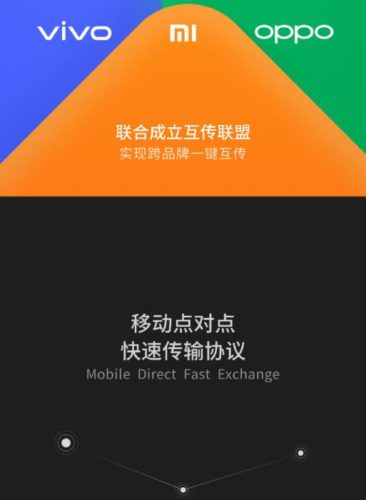 Xiaomi, Oppo, and Vivo each sell smartphones powered by Google’s Android operating system. But versions sold in those companies’ home country ship without the Google Play Store or Google Play Services, which is one of the reasons those companies have each developed their own custom user interface and suite of apps.

Now the three phone makers have announced they’ll work together on a Fast Share/Airdop-like protocol so that it doesn’t matter if you’re using MIUI (Xiaomi’s UI), ColorOS (Oppo’s) or FuntouchOS (Vivo’s software).

When you want to share an item, you’ll be able to pair a phone with a nearby device over Bluetooth and then send it via WiFi with a data transfer speed of up to 20MB/s.

It’s possible we could see other smartphone makers jump on the platform… but I have to wonder whether it will be widely adopted outside of China.

via xda-developers and The Verge