The company first introduced the Mi Note Pro in January, but it will finally be available for pre-order starting May 6th… at least for folks living in China. There’s no word on if or when the phone will be available in other markets. 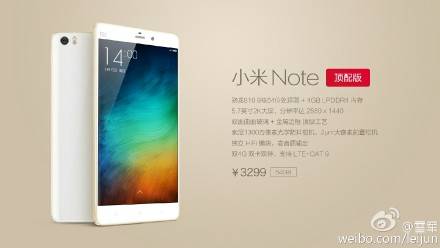 The Mi Note Pro is probably the most powerful phone from Xiaomi to date. But it’s also the most expensive. It’ll sell for 3,299 yuan, or about $533.

That’s still cheaper than the price of an unlocked iPhone, Samsung Galaxy S6, or HTC One M9. But it’s a relatively high price for a phone from a company that’s often known for releasing hardware with high-end specs at mid-range prices.

Xiaomi also offers a model with more modest specs called the Mi Note. It has a Snapdragon 801 processor, a 1080p display, 3GB of RAM, and 16GB of storage and sells for about $370.