Chinese phone maker Xiaomi’s latest flagship looks… a lot like an iPhone X. I know that gets said about a lot of smartphones with display cut-outs around the front-facing camera, but the Xiaomi Mi 8 has one of the widest notches you’ll find on an Android phone… and while it doesn’t have Apple’s patented Face ID system, the notch does house a front camera, and at least one model has an infrared “3D face unlock” feature that is supposed to offer similar functionality.

There are a few things that will probably keep you from mistaking a Xiaomi Mi 8 from an Apple product though. There’s a fingerprint sensor on the back, a USB Type-C port on the bottom, and a bit of a chin (bottom bezel) below the display.

Oh, and the Xiaomi Mi 8 runs Android software with the company’s MIUI user interface, sports a Qualcomm Snapdragon 845 processor, and has a dual-camera system that DxOMark says is one of the best.

The Mi 8 is also one of just three phones the company unveiled last night. 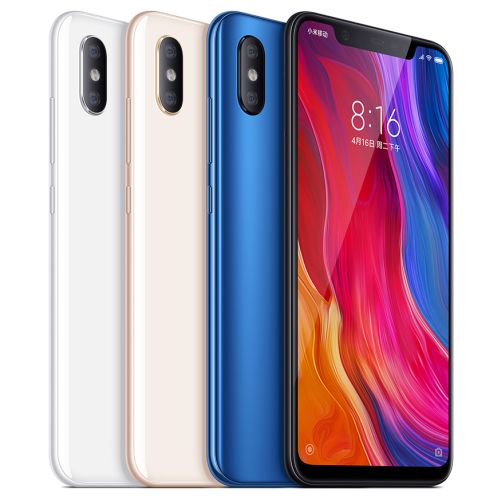 The phone has a 6.21 inch, 2248 x 1080 pixel AMOLED display (with an 18.7:9 aspect ratio, and dual 12MP cameras on the back (one of which has a telephoto lens), plus a 20MP front-facing camera that uses software for portrait mode and other effects.

This model has the same basic specs, but a few key differences that make it clear the Explorer Edition is Xiaomi’s new top-of-the-line model.

Update: Well, maybe it show’s what’s inside the phone…

The Mi 8 Explorer Edition has 128GB of storage and it will sell for about $580, which is pretty affordable for a phone with these specs and feature.

Xiaomi says the phone is about the size of a normal 5.2 inch handset… although the rising prevalence of phones with 18:9(ish) aspect ratios and slim bezels is kind of making that description meaningless.

But it’s not just the screen that’s smaller. The phone is also cheaper than its big siblings, with a starting price of $280 for a model with 4GB of RAM and 64GB of storage. A 6GB/64GB model will set you back about $310.

The phone is also the first to feature a Qualcomm Snapdragon 710 processor, which should bring better performance than the chip maker’s 600-series processors, as well as hardware-accelerated AI features. But the Snapdragon 710 is nowhere near as powerful as the Snapdragon 845 chip that powers the other phones in this series.

While it’s usually a good idea to take synthetic benchmark scores with a grain of salt, Xiaomi says the Mi 8 gets a score of 301,472 in AnTuTu. The Mi 8 SE is said to score 174,333. That’s still pretty good… just nowhere near as good.